Until Dawn: In Memoriam 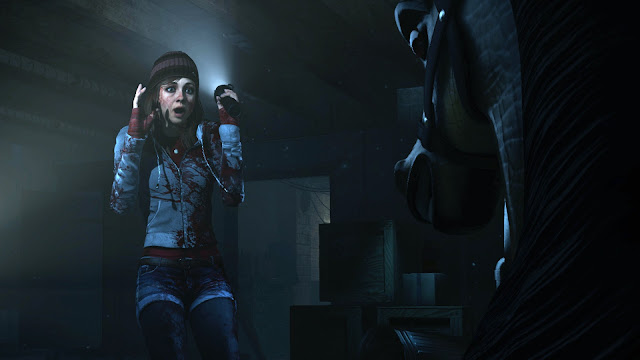 WARNING: This post is full of spoilers for Until Dawn

I wanted them all dead. I spent the first two chapters of Until Dawn hoping that the killer would hurry up and slaughter the cast of annoying, generic, horror-movie teens. I decided that I would do my best to speed things up, purposefully missing QTEs and choosing options that looked likely to result in death. I wanted a speedy resolution so I could move onto something else.

The twists were fairly obvious but that didn't impede my enjoyment. I had the flame-thrower guy pegged as an ally from the moment he offered his hand to Emma and Hannah, and it was pretty obvious that Josh was the “killer” in the house, though the saw stunt threw me for a minute. I thought the totem pole clues were an excellent addition, providing just enough information to make you stop and think before acting, while still being easily misinterpreted. The butterfly affect was a nice touch, though it wasn't always clear how or why one action would affect another, and I really enjoyed the chapter-bridging scenes with Dr Hill. I kept myself entertained trying to figure out how his questions and my answers altered subsequent events.

Although I misconstrued many of the totem warnings, I still managed to keep a good number of the crew alive. Mike, Sam, Chris, Emily and Jess all made it to the end, though I imagine they all caught colds, and I lost no one in the explosive finale. I did, however, lose a couple of my teens earlier in the game.

These are the deaths that I could've and should've prevented (shout-out to the unsavables, Hannah, Beth and flamethrower man).

Name: Matt
Death: Meathook, chin impalement
How Upset I was, out of Ten Upsets: 2/10

I felt bad for Matt. His girlfriend, Emily, was always on his case and death by meathook is never a good way to go. I can't say I missed him though; he was a non-factor and his jacket looked shit. He also made two fatal mistakes that had me screaming at my TV: dropping his axe at the base of the fire tower and firing off that flare gun prematurely. Here I am monsters, and now I have nothing to protect myself with! I'm glad he's dead, the fucking idiot.

He was very good at deer management though. Could've had a career as a park ranger, if he weren't dead. Stupid prick

I didn't really take to Ashley, yet her death is the one that still haunts me. It's not that her demise was particularly gruesome or story-altering, but that it was so easily avoided. I knew it was a bad idea to split off from the group and follow Jess' voice, yet I did it. I knew it was a terrible idea to approach that trap door and I knew that I shouldn't open it, but I did and I immediately regretted it. I was reckless and Ashley lost her head. From what I can gather, it also put the rest of the group in grave danger, as I released the ultra-Wendigo into the mines.

Josh didn't deserve to die like this. He had his head crushed like an over-ripe fruit, one that resembles a head and can also be easily crushed, if you can imagine such a fruit, by his dead-but-now-alive sister. I missed some clues that could have saved him, though I'm not sure that his "good" ending was much of an improvement. Josh was fucked either way, but he's in Mr Robot now, so I think everything worked out ok.

In a year of slight disappointments, Until Dawn was a very pleasant surprise. It was definitely a one-time experience and I'm in no rush to play anything like it again, though I'm very glad I gave it a go.
Contemporary Games