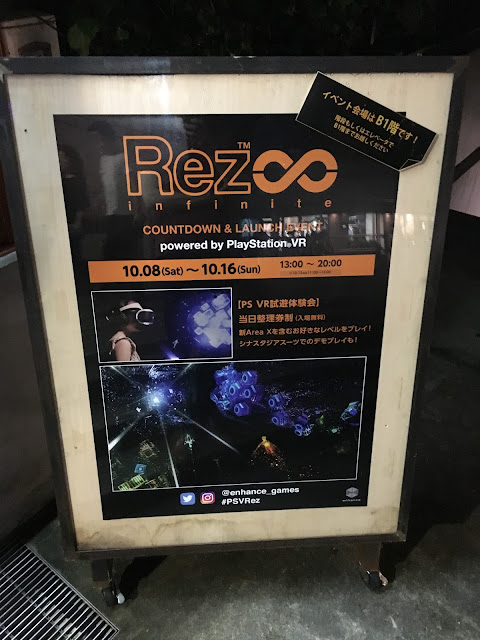 Last month, I tried Rez Infinite VR at Tokyo Game Show. It was a very short demo of a very familiar game. It confirmed something that I already knew, that Rez is excellent, but overall I was underwhelmed by my first experience with VR.

Yesterday, I had the opportunity to try Rez Infinite again, this time at a launch event. Enhance Games have set-up shop in an event space in Harajuku and are running demos into next week. It's open to the public and appointments are made on the day, so do check it out if you're in town. I arrived at 7pm and was able to claim one of the last slots of the day. With thirty minutes to burn, I grabbed a bite to eat, drank some beer and LINE'd a few friends to let them know of my evening plans, before returning for my demo. It was a rather pleasant start to my Saturday night.

I love being back in Tokyo!

From the outset, it was a much better experience than the TGS demo. Better surroundings, better explanation and set-up, a tighter fit on the headset, louder and more comfortable headphones and a far more substantial demo. It felt more like a personal experience, and I was delighted to discover that I could pick the brand new, Area X stage. Demoed to a select few journalists over TGS week, it drew rave reviews. It is an experience built for VR and one that I won't soon forget.

I'm not going to provide a play-by-play of Area X, as you're better off experiencing it for yourself. It was new Rez, it was spectacular and I was able to lose myself entirely in the experience. The colours, the sounds, the VR tech - it all came together perfectly. When it came time to take off the helmet, I was in a daze. The hastily drunk, pre-demo beers may have contributed, but I'd like to think that this was mostly due to Rez. I didn't know what to do with myself, so I loitered for a few minutes, struggling to process what I had just played. I considered speaking with Rez creator Tetsuya Mizuguchi, who was in attendance, but he was talking to other people and I didn't want to interrupt. Also, I had little confidence in my ability to be coherent at that moment in time, as my thoughts had yet to progress beyond "fuck", "great", and "fuck" again.

I was inspired to pre-order Rez Infinite, though I won't be playing it in VR. I shopped around for PS VR, but ¥50,000 is just too steep for a glorified peripheral, no matter how stunning Area X may be. VR in games now makes more sense to me, and I've had my eureka moment, but the cost of entry is just too rich.

I floated out of the demo-space, collected my thoughts and took a moment to message friends, urging them to give Rez Infinite a try. I left Harajuku on a high that lasted well into the night.