How I Met my Game Gear 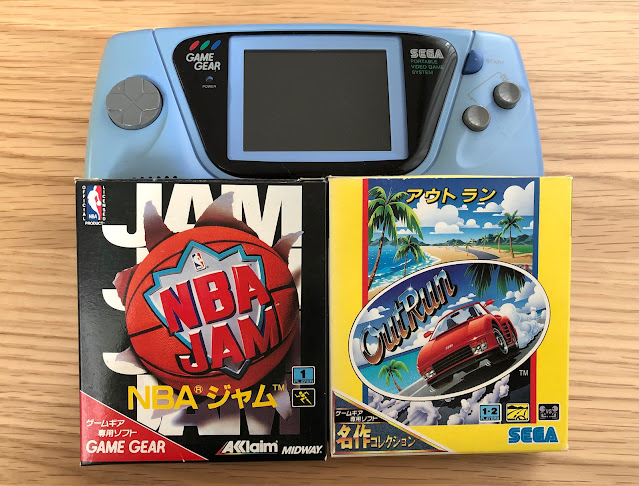 I am here and I am blogging! Sorry for the four-month absence. Here's a week of new posts to make up for it.

I like to write about games from a personal perspective. I want to share how they intersect with my life.

There are only so many reviews or straight-forward informative posts that I can write before I just lose interest. Why would anyone want to read my thoughts about a game, unless I can add a unique perspective or angle? I won’t just write about Kirby, I’ll write about using Kirby to bribe my daughter. I’m not content blogging about the demise of Saturn Junk - I have to tell you about how it’s led to a new found appreciation of Rick James.

I’m guessing you approve, otherwise you wouldn’t be here. As always, thanks for reading.

Today, I’m just going to share a memory, albeit one about games, that doesn’t really go anywhere. An afternoon that I was reminded of yesterday.

It’s a Friday in 2009 and I’m working in Jimbocho, Tokyo. This was towards the end of my first stay in Japan, before we returned to the UK for several years. For some reason, I was able to knock off work early, so a friend/colleague and I headed to Akihabara to grab a beer. He had a few errands to run first, so I decided to check the shops before we had that drink.

I’ve been to Akihabara countless times over the years, and most of these visits are forgotten or have merged with several others in my head, yet this one I can remember like it was yesterday. Probably due to it featuring a mix of people and places that are gone but not forgotten, and a handful of purchases that are at arm’s length as I sit here writing, more than twelve years later.

I went to the game Sofmap first, back when it was filled entirely with video games. No tourist souvenir junk, anime figurines, or cleaning products. Straight gaming bullshit, and some of it retro too. This was back when Sofmap was still beautiful - not as beautiful as it was in its old location, but still properly nice. This was the same Sofmap where I’d bought my V-Saturn for just ¥2000 earlier that year.

This time, I made an equally unexpected find: a blue Game Gear in perfect, working order. I recall it being around ¥3000, though I may be misremembering. They also had a red model for a similar price, but I opted for blue. This was, and remains my only GG, so I was game-less, something I hoped to remedy in the short time available to me, pre-beers.

Already buzzing thanks to my unexpected find, my day was about to get even better. I’m not sure what brought me to this particular spot, but I ended up exploring a series of small, hole-in-the-wall shops on the ground floor of a building that still stands on the south side of the JR station. It was full of booths selling used laptops, junk electronics, transistors etc. Very pre-2010s Akiba. It must’ve been my lucky day, as I almost immediately stumbled upon a shop full of retro games, a shop which I had no idea existed until that very moment. I asked the old man behind the mini-counter if he had any Game Gear games. He gave me a chotto-matte gesture, and soon produced a box full of what appeared to be sealed, dead-stock GG games. I’m afraid my memory fails me here, as I can’t remember what exactly was in there, but I can tell you that I bought Outrun and NBA Jam for ¥500 each. I thanked him and went on my way. I never saw him again.

I’ve discussed this mysterious old man and his booth with other people in more recent years, people who frequented Akiba at that time, and a few of them can recall this guy occasionally being present with an array of retro stock. Still, I’m only half-convinced that he was of our world, and not some friendly spirit, appearing just to sell me pristine Game Gear games before disappearing into the ether.

A lot has changed in Akihabara over the last decade plus. Lots of the smaller shops have disappeared, and the larger ones that remain have diversified somewhat. It’s still great fun to visit, but it’s not quite the same. I know I visited at least one more long-since-disappeared store that day, before grabbing a beer. I went to my favourite import store, the name of which escapes me now. It was opposite the under-the-tracks Trader that is still standing, on the ground floor of the building that used to have Holywood Game a few floors up (excellent variety, awful prices). I picked up Demon’s Souls, which I’d heard so much about from my new friends at 1UP.com. I would bounce off it pretty hard and fast, but I’d eventually fall for its considerable charms on a second attempt a couple of years later.

The presence of my beloved 1UP.com has helped this memory stick. My gateway into blogging and online community, I’d joined a few months earlier. I’d post pictures and a write-up of my purchases later that day, excited to share my find with new friends across the globe.

And I eventually got that beer. My friend had lots of questions about the blue Game Gear that was sat on our tabletop, and I was more than happy to give him the lowdown. That friend is no longer with us, which is another reason why I still remember and cherish the memory of this particular trip to Akiba.

Thanks for joining me on this little trip down memory lane. Drinks in Akiba this weekend?