Elden Ring and the Lull That Follows 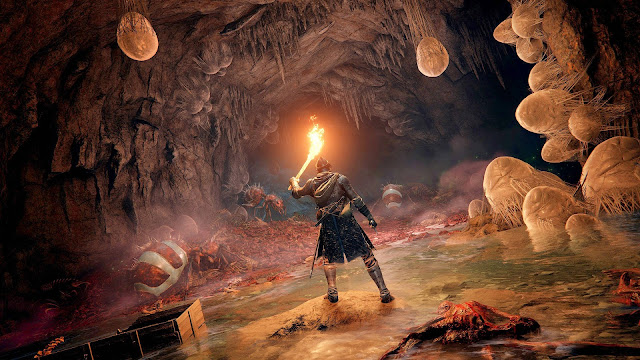 I am here and I am blogging! Sorry for the four-month absence. Here's a week of new posts to make up for it.
It took me one hundred hours to kill a god.
Two months of stick twiddling to defeat Elden Ring's final boss. And that was two months well spent.
I didn't 100% Elden Ring, but I did explore every area available to me and killed every mini-boss I stumbled across. Most of them I battered then and there. Those I couldn't, I bookmarked for a later stomping, once I'd attained a few more levels or just gotten a tad gooder.
Malenia was the one exception. She was a step too far, my patience stretched too thin. As a hench, colossal-sword wielding bastard, I was poorly equipped to deal with her health-leeching nonsense and every co-op partner I summoned seemed equally inept, despite their fancy armour. I tried my luck a handful of times before tackling the final boss, and had another few cracks at her after, but to no avail. She remains at large, a stain upon my gamer credentials.
Batter her for me, won't you?
My feelings towards Elden Ring changed over the course of my playthrough. They were positive at first, then shifted more the other way after the opening hours. By the halfway point, I was so invested in what it does well that I was happy to ignore what it doesn't. The mechanics are those of the Souls family, which means they are excellent. In breadth the world of ER is astounding, and the variety between geographical regions is something I've seen in very few games, if any. The sheer scale of your playground ensures that there is always somewhere to escape to, somewhere to explore or to hone your skills when you hit a boss or dungeon that is beyond your current ability. The world, however, is largely desolate, devoid of meaningful life or characters, and that bothered me in places. As much as I grew to enjoy the open world, the legacy dungeons, with their linear progression interrupted by shortcuts and back routes, were the standout. I enjoyed ER the most when it was doing its finest Dark Souls impression.
My early misgivings gave way to an acceptance, and then embrace, of Elden Ring's excellence. In those two months, it became part of my evening routine. A comforting certainty come 10:30, a guaranteed treat at the end of my day. That routine came to an end two weeks ago, and I have been at a loss ever since. That's the curse of immersive and lengthy games - they eat into your time and enthusiasm for whatever comes next. I haven't been able to settle into anything. I'm unwilling to learn new control schemes and reluctant to invest time into whatever game should come next.
My initial thought was to return to No More Heroes 4. I'd abandoned it after six hours, once my copy of ER had arrived, and I'd hoped it wouldn't be too taxing to jump back in. Well, I may as well have been playing it for the first time. I couldn't stomach or comprehend its crude controls, though I do enjoy the bizarre characters and its unique presentation. I wish Suda 51 had had the balls to make NMH4 a boss-rush, instead of insisting on legitimately awful busy-work between showdowns. I gave up after an hour, and accepted that Travis' quest to become the galaxy's number-one ranked assassin would fall well short.
Sticking with Nintendo Switch, I've been dipping in and out of Switch Sports. I'm having fun with it, enjoyed with my family, but it definitely feels light on content and a minimal improvement on Wii Sports Resort - a thirteen-year-old game, running on seventeen-year-old hardware, that felt a generation behind at the time. Hopefully golf, and perhaps as-yet-unannounced events, will make it a more attractive package.
I also returned to my Xbox Series X. I browsed my library, and spent an hour here and there on several games. I went back to Tetris Effect a few times - a sure sign that I'm at a loss for what to play - and also finished Guardian Heroes for the first time. I've owned a copy on the Saturn for years, but somehow never finished it. I'm glad I rectified that oversight, as it's excellent, but it only filled an hour, albeit a highly entertaining one. In Binary Domain, back compat and enhanced on Series X, I rediscovered a keeper. I'm replaying a decade removed from our first encounter, and it's just as good as I remember. Yakuza Studio's take on the Western third-person shooter has aged spectacularly well. It's funny, satisfying and a wonderful example of games of that era, but ultimately it is a replay.
I've even started watching Netflix the last few evenings, in place of my video game fix. I watched Suicide Squad - forgettable, silly fun - and started Better Call Saul, which I'm already enjoying more than the criminally over-rated Breaking Bad. Imagine that, me watching TV shows in the traditional gaming slot. Elden Ring must've really messed me up.
Maybe I should try Melania again?
Contemporary Games