Old Games on the Big TV 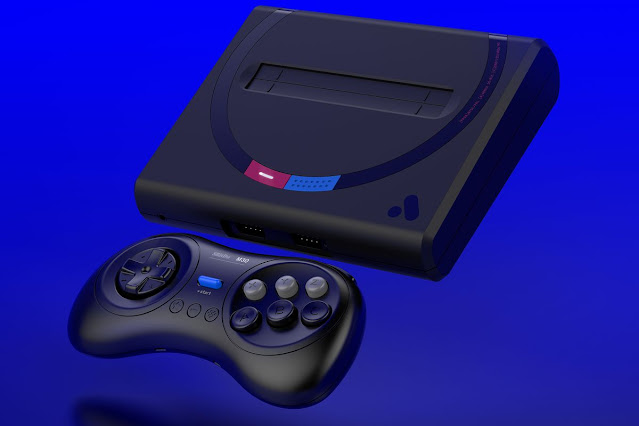 I am here and I am blogging! Sorry for the four-month absence. Here's a week of new posts to make up for it.
As a child, my video game console lived in a drawer in my bedside table. Master System, Mega Drive and then Saturn. When I wanted to play, I'd open that drawer and run the RF cable across my bedroom and connect it to the tiny portable TV on the other side of the room.
That "portable" TV was built like a breezeblock, featuring a built-in VCR player and weighing a tonne. It was all thick, plastic casing and clicky-buttons. An aesthetic nightmare, which included a hefty handle on top for portability. The screen was miniscule, maybe 10-inches, and that's how I enjoyed the majority of games throughout the SEGA era and into the dawn of the Playstation. I'd perch on the end of my bed, leaning into the TV to get a better look, all the while trying not to garrote myself on the RF cable that ran taut across my room.
Some days, we were allowed to play on the big TV. We'd excitedly transport the console downstairs and into the living room, and connect it to the family CRT. This was reserved for special occasions - birthdays, Christmases, or occasionally just when we bought a new game. Video games on the main TV - what a treat.
I'm a big boy now, and regularly play games on the big TV. Even on school nights. That being said, being able to play original retro games on an oversized screen still feels like a treat. And I've been doing a lot of that the last few weeks, thanks to my new Mega Sg.
For those of you unfamiliar with Analogue's Mega Sg, it's a convenient solution to playing retro games on modern TVs. Compatible with most, if not all of the original Mega Drive / Genesis and Master System library, the latter thanks to an adapter, it's a boutique console that runs original carts in HD, 1080p with zero lag. It's usually out of stock, but last month saw a new production run so I got my order in at midnight and had the console in my hands barely a week later. A little expensive, especially considering how weak the yen is currently, but I wanted to do something nice for myself.
I love it. The vivid SEGA colours pop, and I can't believe how good my 30-year-old games look on a modern 4K TV. Sonic, Golden Axe, Shinobi, Sonic again, Streets of Rage; more Sonic. I can't wait to visit the UK later this year and pick up what remains of my old PAL Mega Drive collection. What I have with me now are the Japanese carts I bought fifteen years ago when I relocated to Japan the first time around.
Failed hardware had rendered those carts useless. The JP NTSC Mega Drive I'd bought for my housemates and I for Christmas 2005 has gone from temperamental to non-responsive. I haven't had a working Master System for years, and my only other reliable method of playing 8-bit games - a MS adapter for the Game Gear - stopped being an option when my blue Game Gear packed it in a couple of years back. My retro hardware is failing. Each time I turn on my beloved Saturn I expect the worst. My Dreamcast is becoming increasingly unreliable, and I doubt many of the consoles I left in England work anymore.
Yes, emulation is always an option, but what to do with all those games stacked high on my shelves? That's why I appreciate Analogue's solutions, as they breathe new life into your old software, and look sleek and modern while doing it. I'd have purchased a Pocket already if they weren't on a year backorder. I just wish they'd develop something to extend the life of my sizable Saturn library. The thought of having almost 200 useless games upsets me deeply.
Please save my Saturn?
Retro Gaming