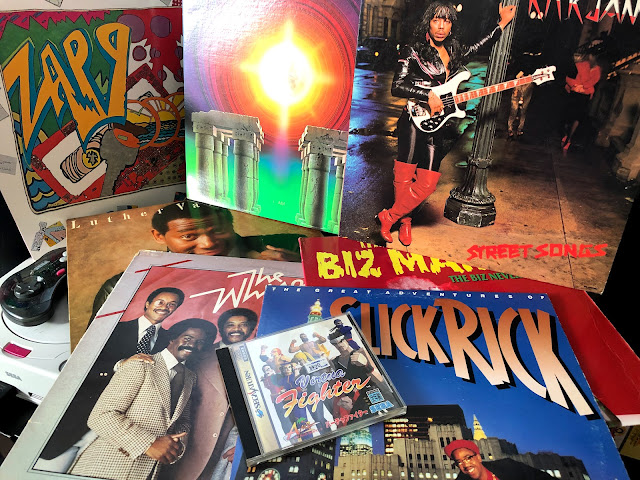 I am here and I am blogging! Sorry for the four-month absence. Here's a week of new posts to make up for it.
One day last week, I ventured into Akihabara. Brave of me, considering it was smack bang in the middle of Golden Week, a string of public holidays here in Japan. Akiba was heaving, even with international tourists still locked out of the country, but I was dead set on having a rummage.
A rummage for games.
I visited the usual haunts: Trader under the tracks, Trader not under the tracks; Beep, Surugaya, Hard Off, the seedier Surugaya near the station, and that booth that's often shuttered where the owner mills around and I can't tell if he wants to be my friend or expel me from the country. I also stopped by the renowned tourist trap, Super Potato. SP is known for its high-prices, but if you know what you're looking for you can occasionally find a bargain. Not this day, though. Not at all.
One Junk item in particular caught my eye - a rare piece of hardware marked up as Junk. The Junk tag essentially means that it's not guaranteed to work. In the case of consoles, it probably means it's broken; for games, it's most likely just untested and uncleaned. The item in question was a Wondermega, a Mega Drive and Mega CD hybrid. This particular model was manufactured by SEGA and was a Japan-only, 1992 release. Honestly, I'd love to own one, and deeply regret not picking one up in the mid-2000s when they were a fraction of their current price. It was made abundantly clear that I won't be buying one now, however, as this Junk console, sans cables and controllers, was priced at a cool ¥43,780 ($340).
Retro prices have gone through the roof. On top of that, Junk has changed. Good Junk is dead, by which I mean pre-8th Generation junk, specifically for the Saturn.
Fully expired.
Back in the day, I'd lose hours sorting through tubs of Saturn games all priced at a pittance. Disc-only copies of uncommon games for a couple hundred yen; boxed, common games for ten. So much of my collection came from the Junk section. Some of my games are a little rat-eared, yes, but Japanese-used is far better than second-hand back home. In years of buying from the Junk bin, I can only think of one occasion when a game didn't work. I'm fortunate enough to own some fairly expensive games that I barely paid anything for, Symphony of the Night and Metal Slug being two prominent examples. Junk pick-ups that I still feel good about, well over a decade later.
Those days are now gone. I miss being able to build up a collection of physical media on the cheap. That rush of excitement as you rummage through a box, knowing that somewhere between those multiple copies of Virtua Fighter, there might be a Guardian Heroes or a Silhouette Mirage. I don't want to pay full-whack - I want the rush of finding a bargain and knowing I got a good deal.
I miss that, so I found a new fix, and I think I'm going to be fine.
I mostly stopped buying retro games a few months ago. I stopped looking at the Mercari app too. Instead, I've been frequenting record stores. I am now a vinyl pervert - in particular I like to indulge myself in 70-80s Soul, Funk and Hip & Hop. Much like Saturn Junk a decade or two ago, no one really wants this stuff, as evidenced by the low-low prices and abundant stock. I want it though, and I want the experience of seeking out records and artists that pique my interest, or taking a flyer on an artist I'm unfamiliar with, just because I dig the cover artwork. I want to spend an hour in the shop, sorting through everything, balancing copies of Rick James, Zapp! and Alexander O'Neal records in the crease of my arm.
Vinyl is sating my appetite for low-price, vintage media. Saturn Junk may be no more, but I reckon I have a few more years of entertainment ahead of me before the market takes ¥300 Earth Wind and Fire vinyls away from me.
And by the way, allow me to recommend buying those PSP, Wii, PS3 and 360 games you're interested in, because they won't be that cheap for much longer. Trust me.
Akihabara Retro Gaming