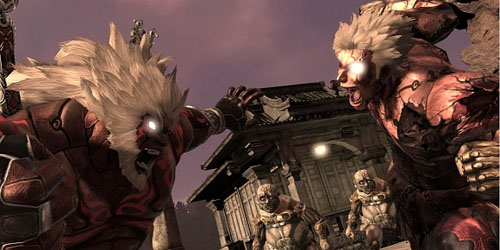 Before sitting down and getting stuck-into Asura's Wrath, I was given a friendly warning by a Capcom employee not to expect a typical demo. This wasn't just PR hyperbole, as it turned out to be by far the most difficult demo I've come across in six years of attending TGS, and one that gave me a real sense of achievement once I'd finally finished it. I was especially proud, as I didn't see anyone else make it to the end in my 30 minutes with Capcom.

As well as offering up a real challenge, Asura's Wrath took a rather unusual form for a fifteen minute demo. Instead of offering-up a range of gameplay features, representative of the full experience, it focused solely on a hard-as-nails boss fight, which although it may not be indicative of the rest of the game, certainly gave a strong indication of its style: O.T.T action from start to finish. This will be of little surprise to those of you who have seen the early trailers which featured our fallen deity, Asura, battling a planet sized god and attempting to halt a giant finger the size of a skyscraper.


As if the breakneck and devastating combat between Asura and his overpowered foe wasn't ridiculous enough, the battle is set on the moon and concludes with our protagonist hurtling through space towards earth, skewered on the end of a giant sword. His six arms begin to disintegrate as he enters the earth's atmosphere, leaving him with just the regular two, though these painful amputations didn't seem to bother him all that much.

Between earth/moon shattering blows, our burly pair bark at each other in the gruffest of voices, each doing his best impression of Kratos in an especially foul mood. I quickly learned to ignore the nonsense each was spouting and instead focused on the combat, which kept me on my toes throughout. I have seen it likened elsewhere to games as varied as God of War, Virtual On, Street Fighter IV and even Fist of the North Star - all of which are apt comparisons - though ultimately it managed to achieve a style all of its own. I was armed with the standard heavy and light attacks, as well as blast, all of which dealt substantial damage when they found their target. But things were not quite that simple, as cornering my nimble foe was more difficult than getting Sony to give a concrete release date for The Last Guardian.

Without the ability to block, jumping and dodging became skills worth mastering, especially during the latter stages which required quick reflexes to squeeze through a bombardment of light beams. Once I had wreaked enough havoc, a much needed unlimited mode became available. Suitably powered up, and faster than ever, I could finally land some combos, which sent my opponent reeling. This reliance upon stringing together powerful attacks made Asura's Wrath feel right at home sat next to Marvel vs. Capcom 3 and Street Fighter x Teken at the Capcom event.

The two pronged battle was riddled with QTEs. At times they felt intuitive and very much part of the experience, but at others more tacked-on and superfluous. For better or worse, QTEs will be present throughout the game and look set to feature heavily in the boss battles.

I certainly hope that Asura's Wrath will turn out as unique and memorable as its challenging demo. Although it shed very little light on how the rest of the game will be structured, it certainly grabbed my attention with its combat mechanics and a visual style all of its own. Look for more information on this PS3 and 360 title as we get closer to 2012.
Tokyo Game Show '11