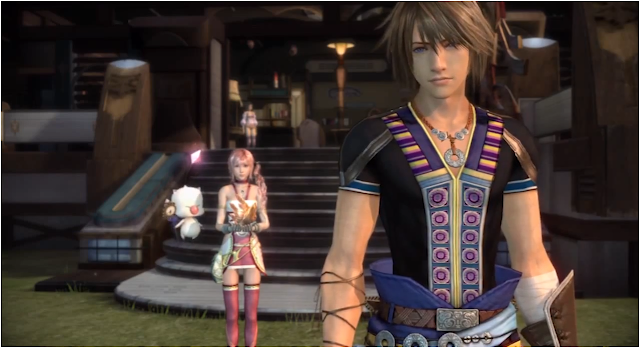 After putting over one hundred hours into Final Fantasy XIII last year – a meagre summer line-up and a mild addiction to trophies were the cause – I felt like I had had my fill of all things thirteen. The prospect of XIII-2 was not one I savoured, and the -2 suffix brought back unpleasant memories of X-2.

With this in mind, I approached the FFXIII-2, TGS demo with trepidation, but left with renewed interest in this latest addition. The demo featured a party of three, including Serah, who returns from the main game; Noel, a new addition who sports a very un-FF-like name but bears a slight resemblance to Kingdom Hearts' Sora; and a Moogle who turns into a weapon which, in the demo at least, only Serah could wield. Further characters are expected to feature in the final game.

The impressive visuals and familiar battle mechanics return, including the paradigm shift system, with the demo featuring the roles of attacker, blaster and healer. More importantly, there were some intriguing new additions which may yet entice those still suffering from XIII fatigue to return to Gran Pulse.

The first is the inclusion of non-playable characters with whom you can interact; a direct response to one of the biggest complaints levelled at the original. The opening setting was full of life, with countless NPCs going about their business. Most of them could be conversed with, with some having pertinent information to share and others offering little more than idle chatter.

Enemy encounters have changed slightly, with foes no longer visible from a distance. Monsters do not roam the map, but will instead suddenly appear as you approach, though it provides plenty of time to gather yourself in an attempt to earn an all-important pre-emptive strike. When set upon, if you close-in on your foes quickly enough then you will be granted first strike once the battle begins. Defeated monsters may also join your party and pop-up in battle, swapping in and out as you change paradigms. This "Feral link" was an interesting addition and one that could add depth to roster management, but there was little indication as to how or if you can control which monsters to befriend and how to deploy them.

"Cinematic Actions" bookended the different parts of the boss fight that dominated the opening of the demo; events that were QTEs in all but name. Although they give you something to do during the short, mid-battle cut scenes, I was left unsure of what they added to the experience, and concerned as to how heavily they will be utilized throughout the full game.

The TGS demo clearly demonstrated some of the improvements on FFXIII's gameplay, including the evolution of the battle system, but there is still a great deal that we don’t know about Square Enix's latest spin off. What we do now know, however, is that it will be released in Japan in December this year, and will follow around six weeks later in Europe and North America.
Tokyo Game Show '11