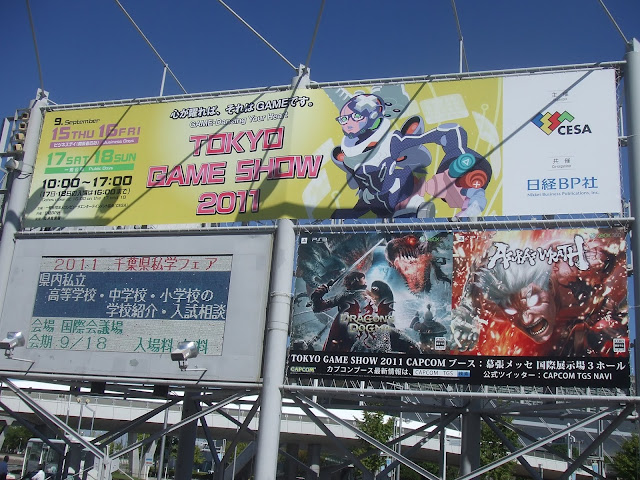 Day two of Tokyo Game Show is now finished and with it the industry side of the event draws to a close. With the initial excitement of day one a distant memory, today was my chance to check out the games I couldn't find time for during a hectic opening day, as well as attend an appointment with Capcom. However, by lunchtime I was scraping the barrel for games I was willing to queue-up for, just like I do every year.

That's not to say that I didn't have a great time. There was plenty to keep me busy and despite a lingering hangover, and a lack of sleep, I saw the day through to the end. Here are some of the highlights, with plenty of detailed, hands-on impressions to follow in the coming days.

A. Today seemed a little less busy, with plenty of attendees rolling-in long after the official opening. That didn't stop the Vita from boasting queues of upwards of an hour for even the least interesting titles. Saturday and Sunday - the public days - will be a mad house with waiting times approaching three hours. Not fun.

B. As I said I would yesterday, I headed straight for Sony the second the main doors opened, in an effort to try out the PS Vita and Uncharted Golden Abyss - a game which had by far the longest queues of day one. I reached Sony and was in the Uncharted line within sixty seconds of passing the entrance, only to be told by the attendant that the wait already stood at 80 minutes! Having appointments to keep within the hour, I was forced to abandon my hopes of experiencing Drake's first portable adventure and instead joined the significantly shorter line for Sumioni. I'll share my thoughts on the PS Vita in the next few days.

C. I may not have played Golden Abyss, but I did get my hands on the following:

D. Capcom were good enough to give us some private, hands-on time with some of their English language games. Seth Killian was a rather amiable chap, and talked us through Street Fighter X Tekken and Marvel vs. Capcom. Dead Rising 2 Off the Record is more of the same and Asura's Wrath was tough but very interesting. It was nice to enjoy some new games in peace, as we sat down with air-con and complimentary drinks. Unfortunately, my attempts to infiltrate other closed door events, to which I was not invited, were thwarted by men in suits and very official looking registration desks.

E. Although I wasn't able to demo a game, I did get the opportunity to hold and play-around with the 3DS, second thumbstick add-on. I can say that it feels nearly as bad as it looks, which is awful. It has the appearance and feel of a cheap, third-party knock-off and turns a tidy portable device into something that will not fit into even the most spacious of trouser pocket.

F. Some people just love the sound of their own voice, such as the prick who plonked himself directly across from me in the press room and went on about nothing in particular for thirty, uninterrupted minutes. Unfortunately, I didn't share in his enthusiasm for the sound of his voice, though I'm happy to say that I managed to refrain from smacking him over the head with my laptop. It seems I really am a people person after all.

G. I resisted buying an ugly, Kazuma Kiryu t-shirt, though I was nearly defeated by a Sega Saturn iphone case, despite not owning an iphone!

H. As a very generous welcome gift, the organisers of TGS provided two free, post-show drinks to all members of the foreign press. Predictably, the makeshift bar filled up rather quickly and I'd be surprised if there were any unredeemed coupons come 8pm. Chances are this will be the first and last time this service is offered!

With the exception of the two public days, TGS 2011 is now done and dusted. The realisation that it is over for another year has left me feeling blue, as the return to reality can be a real downer. But overall, I've had two great days and I'm looking forward to sharing lots of previews over the next week. Be sure to check back for a range of impressions, including PS Vita, Binary Domain, Final Fantasy XIII-2, Lollipop Chainsaw, Asura's Wrath and much, much more.
Tokyo Game Show '11