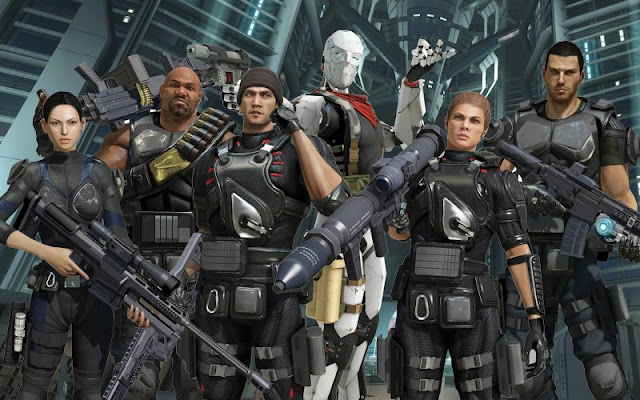 Like most developers at TGS 2011, SEGA's booth was smaller than in previous years. However, there was no shortage of quality games, of which Binary Domain was the focal point. SEGA offered a revealing 15 minute trailer for the latest game from Toshihiro Nagoshi - creator of the Yakuza series -  that was immediately followed by an impressive demo.

Binary Domain takes place in Tokyo in 2080, where robots mingle with humans; serving drinks in your local coffee shop and even holding down office jobs and leading human-like lives. Cyborgs have been assimilated into society, and unless you peel back their skin - there was plenty of flaying in the extended trailer - you can't be sure who is made of flesh and bone and who is synthetic.

The trailer made it very clear that this is to be a rather violent affair. The similarities to the Yakuza series do not end there, with Binary Domain also taking place in Tokyo; albeit one far different to the city once ruled by Kazuma Kiryu and co. The trailer and demo displayed many more Nagoshi hallmarks, in particular the character design and the emphasis on story and character development. The use of well-known Japanese TV and movie stars as voice actors, and the shameless product placement that keeps Yakuza grounded in reality, will also be instantly familiar to fans of his more recent output.

Although the squad-based demo wasn't quite as polished as the trailer, it was still great fun and showed a lot of promise. The cover-based, third-person shooting borrows heavily from Gears of War and was fluid and satisfying,. It was effortless to duck in and out of cover, achieve favourable angles for some sniping or just unleash a barrage of blind-fire. Your bullets rip through determined waves of robots, who tear apart piece by piece. It takes a fair bit of time to bring down even the most elementary of robots, as they continue their advance even when your aggression has rendered them little more than a torso, head and a mess of wires. With this in mind, I quickly got into the habit of emptying another clip into downed enemies, just to make sure. Despite the lack of blood and gore, the violence directed at machine is as brutal and memorable as the street fights of Yakuza.

The demo was entirely in Japanese, which limited my exposure to the squad-based, voice commands. On occasion it offers-up a handful of orders that enable you to direct your squad via voice activated commands. These prompts include things like cover me, push forward and hold your ground, and many of them were accompanied by a set piece of character dialogue. This allows you to choose how best to approach each skirmish, whilst still keeping the action within the confines of what the developer wants you to experience. As much as I enjoyed the combat, I can't say that I really noticed my squad doing much of note, and within the confines of the demo I wasn't convinced that they added much to the experience.

Binary Domain also features some RPG-like elements, as well as narrative choices which carry far reaching consequences, including which of your squad members survive. A trust based system was also discussed, but not demoed, whereby the level of trust between yourself and your comrades will dictate how they perform on the battlefield and how they interact with you.

Binary Domain is due next February for the 360 and PS3. Unlike the Yakuza series, it has been developed with both a Japanese and western audience in mind, so it is a safe bet that this promising hybrid will make it to European and North American shores.
Tokyo Game Show '11