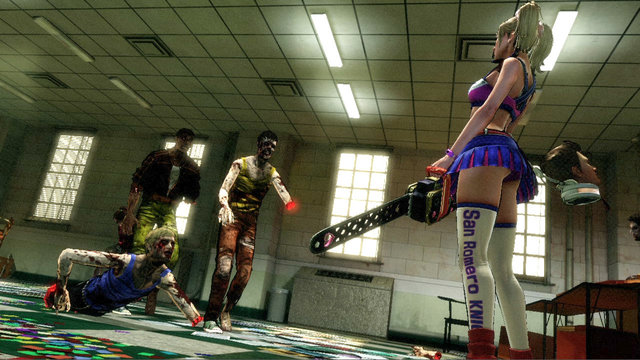 Lollipop Chainsaw is shaping up to be completely mental, but in a good, Suda 51 kind of way. The TGS demo gave a brief insight into his latest hack-and-slash, and it was one of the more memorable hands-on of the two days. It felt like a mix between Saved by the Bell, Buffy the Vampire Slayer and an abattoir, only with more zombies, chainsaws and mini-skirts. As I say, mental.

Lollipop Chainsaw is about a zombie hunting cheerleader, Juliet Starling, who is trying to rid her high school of the undead. She does this with her trusty chainsaw, which she wields with lumberjack-like confidence, and an impressive set of acrobatic moves that see her leaping and twirling from one gushing zombie stump to the next.

The violence was gratuitous, but very much tongue in cheek, and the action arcade in nature. Vanquished zombies spew all sorts of shiny collectibles, including hearts and coins, which constantly reminded me of No More Heroes. The controls are easy to pick up and combat is fluid, as light, strong and low attacks are strung together with jumps and splits to create combos that often end in a cheerfully bloody finisher. It’s easy to evade your stumbling foes, and an evasive leapfrog can be turned into a chainsaw-in-the-spine counter, which quickly became my favourite and most reliable method of attack.

Impressive and easily achieved combos sent the ever present score meter through the roof, suggesting that emphasis may be placed on high scores and slaying the undead as stylishly as possible. Although these combos were satisfying, the demo required little more than determined button mashing, which sufficed in bringing down all but one of the high school zombies. A more challenging mini-boss, armed with a table which he used as both shield and weapon, demanded a slightly more tactical approach. Even still, the power of Juliet's chainsaw and the speed of her balletic acrobatics made short work of even the most stubborn of animated corpses.

Despite being rather colourful, the visuals were perhaps the most underwhelming part of the demo. Running on the 360 - it will also be available on the PS3 - it looked a little grainy and unpolished, though to be fair it is still a long way from release and Grasshopper aren't exactly known for their pretty visuals.

Alongside the zombie baseball, Kinect-enabled, Diabolical Pitch, Lollipop Chainsaw marked a rather eventful TGS for Suda 51’s Grasshopper Manufacture. This high school splatter fest has already secured a publisher in the West, so be prepared for bloody madness when it is released sometime next year.
Tokyo Game Show '11