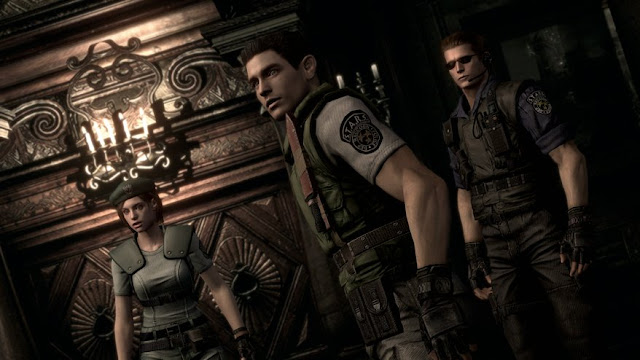 I'm currently making my way through Resident Evil HD Remaster. It is a prettier version of a remake of a game that I haven't touched for at least seventeen years, a game that I have fond memories of playing on my gone-but-not-forgotten Saturn.

A lot has changed in seventeen years - I now have facial hair and a PS4 - but Resident Evil remains a compelling experience. With its B-movie production values, memorable setting, and refusal to hold the player’s hand, it is exactly the game I remember. It is a familiar experience, albeit one that I now approach in a very different way.

I'm used to being able to save where I want, when I want, and expect games to have my back should I neglect to save before a game-over. Forget online multiplayer and digital downloads, auto-save is the single greatest feature of modern gaming. Resident Evil HD wants no part of this nonsense, as it retains its antiquated save system: a tiny number of manual save points (typewriters) which can only be used if you have an ink ribbon, which are scarce. The prospect of dying and having to replay more than a few minutes of gameplay scares me shitless, so I have been saving often, and in doing so have made a rod for my own back. As I approach the final stretch of Chris' campaign, I have only a couple of ribbons left; only now do I understand the true horror of Resident Evil.

Fifteen-year-old me would have scoffed at old-man Matt and his need to save every five minutes. There was a time when I was happy to jump in head first, die and replay extended sections until I got them right; I had plenty of free time and a limited number of games to play. These days, I have next to no time, and even less patience, and there is always something new to move on to if I feel a game is wasting my time.

I'm not usually the biggest fan of obscure puzzles, of which Resident Evil has plenty. Fortunately, the internet can tell me exactly where to shove the moon crest and which direction the weathervane should be facing. I have no idea how I figured these things out before I had access to the internet and its FAQy goodness. I’m certain that I didn’t have a guidebook, so I'm assuming my original playthroughs relied solely upon trial and error. These days, I'd prefer to consult YouTube and get everything just right the first time around. When did I become such an unadventurous gamer?

Resident Evil Remake, Remade in HD, has taught me that I game like an old man, which I'm fine with. Spencer Mansion is a much more frightening place today than it was all those years ago, as it refuses to cater to modern expectations, but I'm glad I took the opportunity to return.
Contemporary Games Retro Gaming