In Praise of Yakuza 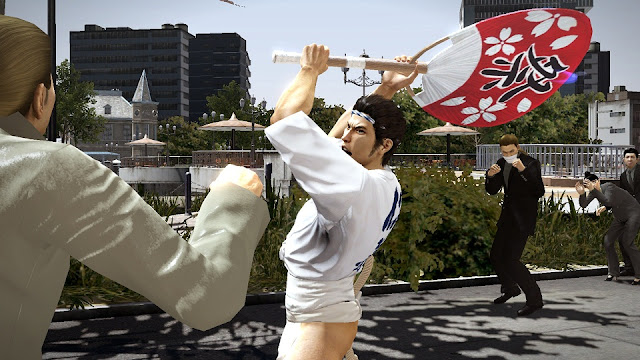 Uncharted, Metal Gear Solid and Yakuza are my favourite modern, video game franchises. Uncharted is the peak of action-adventuring; Metal Gear Solid is silly and sublime, and Yakuza is more fun than playing Just Dance with your trousers off. There is nothing quite like Yakuza, and that's why I love it.

Yakuza is somewhat of a rarity - a SEGA, home console franchise that is in rude health, in Japan at least. Produced by Toshihiro Nagoshi, a long-time Sega employee who has worked on everything from Daytona USA to Shenmue, Yakuza has sold millions of copies in Japan but has struggled to recreate this success elsewhere. For the most part, it has been a PlayStation exclusive, with the lone exception being a doomed Wii U port. It has also been adapted into a film, directed by cult favourite Takashi Miike, which succeeded in capturing the style and feel of the games.

Yakuza debuted in 2005 on the PS2, but my first experience wasn't until 2011 and Yakuza 3. I have played at least one Yakuza every year since and my appreciation for the series has increased with each passing year. It caters perfectly to my tastes, featuring RPG-lite elements, outstanding combat, gripping narrative, innumerable distractions and mini-games, memorable and likable characters and a fine sense of humour. The primary setting, a fictionalised version of Tokyo's largest entertainment district, is a huge part of the attraction, as it reminds me of my years spent in Tokyo, albeit with a lot more curb stomping.

Yakuza is the perfect mix of the real and the absurd. It might be about gruff men ripping their shirts off and kicking seven shades of shit out of each other, but it has never taken itself too seriously. It focusses on a nasty section of Japanese society and is full of unpleasant people and tragic events, but it never forgets that games should be fun and it is as colourful in content as any game from Sega's heyday. You might be tracking down a ruthless killer or trying to prevent a street massacre, but there's always time to piss about at karaoke, visit the arcade, race some taxis or play table tennis with a scantily-clad lady. The series spin-offs are an extension of Yakuza Studios willingness to be a bit silly, transporting us to 17th and 19th Century Kyoto (Kenzan and Ishin), as well as throwing us into a zombie apocalypse (Dead Souls). Even when it’s a bit shit, it still manages to entertain (see: Dead Souls).

With Sega shutting up shop left, right and centre, it seems highly unlikely that the West will ever see another Yakuza at retail. However, it does have an immediate future outside of its country of origin, albeit a digital-only one. Sony has stepped in where Sega would not and will localise Yakuza 5, which will receive a digital release on PS3 this summer. It might be two years late, and a little bloated, but I'd still highly recommend it. And if you haven’t already, you should definitely have a look at Yakuza 4, which is “free” this month as part of PS Plus.  It is the best Yakuza and is one of my favourite games of the last generation, so it would be rude not to.
Contemporary Games Japan