Christmas, My Grandma and Sega Rally 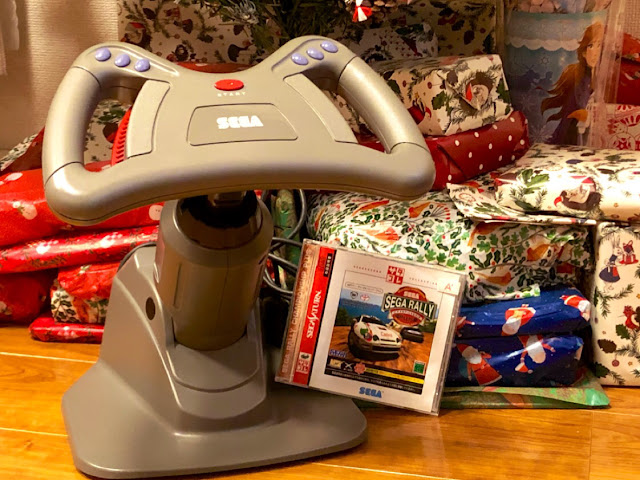 Be sure to check back in the coming days, as I'll be posting my Best & Worst of 2019 some time between Christmas and the New Year. Happy holidays!

My first console, the Sega Master System II, arrived one holiday in the early Nineties. From that point on, games were a regular Christmas fixture.

However, while I certainly enjoyed video games as a kid, I was far from an expert. I'd pick up a magazine from time to time - a Sega Power or Mean Machines - but most of my wisdom came from either the playground or the Toys R Us Christmas catalogue. Until my mid-teens, I was always a generation behind and I didn't care one iota. I had a Master System when the cool kids were playing Mega Drive; the Christmas I upgraded to 16-bit was the same year the Playstation debuted. When I finally caught up, I did so with a console that, unbeknownst to me, was already dead in the water. For Christmas 1996, I asked for a Sega Saturn.

My original thought was to get a Mega CD, but friends talked me out of it, robbing me of the chance to play Night Trap and Kriss Kross: Make my Video. Anyway, I figured the Saturn would be too expensive for an Xmas present. However, I underestimated my father's haggling skills and the desire of the local game store to offload as many Saturns as it could, to clear shelf-space for more desirable consoles.

I was spoilt rotten that Christmas. I received a Saturn with Sega Rally, Virtua Fighter 2, Alien Trilogy, Olympic Soccer, a second controller and the racing wheel. My Dad had fleeced the teenage staff at EB and I was exceedingly proud of him. Little did we know that I'd be reselling my bundle 18 months later, to fund a PS1 purchase. But anyway, good vibes.

Unfortunately, the family TV was a relic of the distant past (the 1980s) and was not compatible with the in-the-box cables. Unperturbed, I moved out of the living room and parked myself in front of the portable TV, which is where I spent most of Christmas day. I didn't quite get Virtual Fighter 2 at first. It looked beautiful, but I was unaccustomed to its slower pace and floaty controls. Olympic Soccer was serviceable and I was blown away by the atmospheric Alien Trilogy. However, Sega Rally was the pick of the litter.

At some point during the morning, my grandma wandered into the room. I can't quite recall, but I expect we had one of those typical conversations where you try to explain something tech-related to an elderly relative. There would've been a lot of eye rolling on both sides, some "in my day" from her, and some "you wouldn't understand" from me. Being that I was thirteen, I'm sure I would've been a right arse about it. As any good grandparent would, she feigned interest and challenged me to a game of Sega Rally. I gave her the pad, while I tried the steering wheel, as I figured it would level the playing field a little. Being that it was shit.

She beat me. Wiped the floor with me, in fact. And then she walked away. She wanted no part of a rematch, and offered no chance at redemption for her grandchild. In victory, she was as cold as that frosty December morning.

Whenever I play Sega Rally, I think of my grandma. I think of family and I think of Christmas. Good times spent with the people I love. Those are the memories that truly matter.

Happy Holidays to you and yours x
Retro Gaming