The Twenty Year Wait: The Bouncer 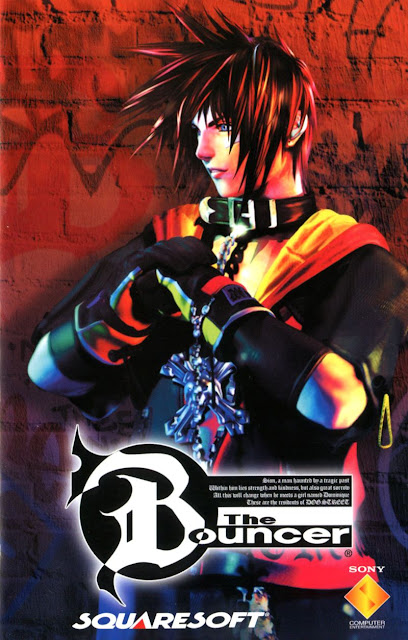 I remember gawping at the preview images in the Official PlayStation Magazine. The Bouncer was the poster boy for the next-gen jump. This is what games would look like on the PS2, and things would never be the same again.

The Bouncer, Squaresoft's first PS2 game, arrived at the very tail end of the console's launch-window, and it did so with a whimper. It received mixed reviews and was soon forgotten, replaced by equally beautiful but far more substantial games. The graphics-likers found new things to lust after, and the Square faithful put all their energy into pining for Final Fantasy X. When I finally bought a PS2 in the summer of 2001, I'd forgotten all about the game that had once made my favourite PS1 titles seem like pixel puke in comparison.

Fast forward almost twenty years, and I'm finally playing The Bouncer. In a last-gasp attempt to recapture my youth, and spurred on by a ¥55 ($0.50 / 38p) price point, I bought a copy. I hadn't thought about The Bouncer for almost twenty years, until I saw it sat in a discount bin at one of my favourite Akiba haunts. The teenager inside me insisted that I buy it; the thirty-six year old me was too tired to argue.

Neither bothered to check whether my PS2 still worked.

Unboxing my Japanese PS2 slim for the first time in almost a decade, I was surprised to find that the controller had discoloured and turned an unappealing tobacco yellow. However, everything still worked. That includes my memory card - a time capsule for my late-teen to early-twenties gaming habits. There are save blocks for multiple playthroughs of MGS2 and of course Snake Eater, because why wouldn't there be? Timesplitters 1-3 is on there, as is God of War 1 and 2, two of the last games I played before upgrading to the next gen. A slew of NBA Lives are present, Resident Evil 4, Medal of Honor Frontline, NBA Street and, good lord, Dirge of Cerberus. The final slot is Quake 3, which contains a league table for 3 years of multiplayer matches between me and my university housemates. I can no longer recall the faces of my uni friends, but I still have access to their kill:death ratios.

Anyway, The Bouncer. Compared to the games we were playing on PS1, it looks beautiful. A huge jump in visuals from one machine to the next - the kind of leap that we'll probably never see again. Nomura is all over the character designs. There are Laguna and Zell lookalikes, and liberal use of instantly recognisable FF imagery. One of our leads wears a Cactuar-emblazoned jacket and another has what looks like Rinoa's canine pal, Angelo, plastered on his back. Our three selectable leads dress like the Spice Girls, which was the done thing at the turn of the century.

The Bouncer is a beat-em-up in the Die Hard Arcade mould. Sorry, I should've probably told you that five hundred words ago! The levels are comically short, usually no more than sixty seconds, and often far less. I swear I've spent far more time in save screens than I have battling ninja gimps. The combat is very simple and at one point I had to punch a Rottweiler that was wearing a backpack. The camera is awful.

The Bouncer probably wasn't worth the near-twenty year wait. However, I definitely got a kick out of playing a game that was once so vital in shaping my expectations for the future of gaming.

And it only cost ¥55! Sometimes it pays to wait (twenty years).
Retro Gaming