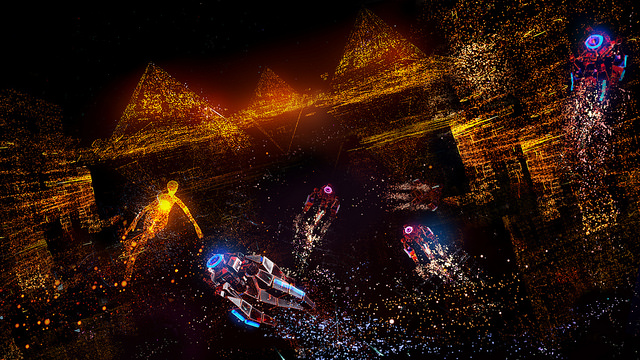 Tokyo Game Show was my chance to try VR for the first time. It was at the top of my to-do list, but getting a hands-on proved more difficult than I anticipated. This years' show was dominated by Virtual Reality and everyone and their mother wanted to try it. Appointments were hard to come by and queues were upwards of two hours. However, with a bit of persistence, I was able to secure a time slot with Rez Infinite. I was very pleased with myself.

I've been sceptical of VR games. Early adopters aside, I have my doubts as to whether the average home console or PC owner will invest in the required hardware. I also question whether people really want to be that shut off from reality and whether the intensity of VR runs counter to why many of us play games: to relax. VR always struck me as a fun looking experience at a trade show, but not so much at home.

That's what I thought before trying it myself. Following my hands-on with Rez Infinite, and having had the chance to see many other different ways that the tech can be implemented, I now have a much better appreciation of VR and games. However, I'm still not entirely sold.

I have played Rez countless times over the years, but never quite like this. Tetsuya Mizuguchi's rail shooter is as wonderful and relevant as ever, and I'm happy to see it released in another format (the original Dreamcast game was ported to PS2 and eventually came to Xbox 360 as an HD upgrade). I'm sure you've played Rez before, or are at least familiar with it, so I won't go into all the details. Basically, you are travelling through a computer network, shooting up some bad-bytes, accompanied by a heavy and memorable electronic soundtrack.

The Sony VR headset was fairly comfortable. It was light, easy to put on and didn't restrict my movement in any meaningful way. It's always difficult to judge peripherals at trade shows, as they're never quite set up as you'd have them at home. I felt that the headset could've been a little more secure, but I'm sure I would've done a better job of adjusting it to my liking, if I were given the time. But overall, I was impressed. Unfortunately, I can't say the same about the headphones. They were slipping off throughout and were far too quiet. Rez' soundtrack should be booming, especially when you are trying to drown out all the other noise at TGS.

I wasn't sure what to expect until I put the headset on, as I never really stopped to consider what VR would or wouldn't be like. It was a 360, assault on the senses, and was a perfect match for Rez. My head movements controlled targeting while the regular PS4 pad was used for shooting. Targeting with my head came naturally and there was no having to get used to it; spinning around and seeing the game continuing behind me was a moment I won't soon forget. It all worked perfectly - there was no lag and it was very accurate - and I really enjoyed the demo.

However, and this may be partly due to the setting, I didn't loose myself in Rez like I thought I would. I was always very aware that I was sat at a trade show, wearing a silly helmet, playing a video game with a regular controller. Take away that controller, and perhaps it would've been more immersive, even if the replacement had simply been the PS Move. The controller grounded the experience, a constant reminder that I was just playing another video game, albeit presented in a slightly different way. My other main gripe was the lack of visual sharpness. My peripheries were blurry and the step-down in visuals from the non-VR games that I'd been playing all day was jarring.

I enjoyed my time with Rez Infinite, but that's to be expected. It's a wonderful game and VR added a new a welcome dimension to this familiar experience. However, I can't say that it convinced me to invest in Sony VR, or any VR set for that matter. I'll keep an open mind moving forward, as I realise that this is just the tip of the iceberg, but I'm just not there yet.
Tokyo Game Show '16