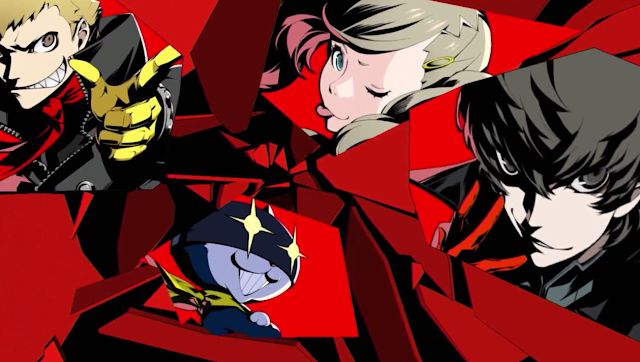 Persona 5 is already out here in Japan, but that didn't stop me and countless other punters from queueing up for the TGS demo. It was brief, stylish and unique and was probably the best game I played over the two days.

The demo is set in an art gallery/museum and our team of four, three teens and a cat, are attempting to sneak their way through for unknown reasons. It was very light on narrative, with the focus entirely on action. The dungeon was full of laser triggered alarms, which our hero deftly slid under or jumped over, or at least he did when I remembered to press the correct button. Possessed security guards roamed the halls, but it was fairly easy to either sneak past or get the jump on them. There were some basic stealth mechanics, as characters could take cover behind large objects, but there was little need to play it quiet here.

It may have only been a short demo, around fifteen minutes of free-play, but that was ample time for Persona 5's unique style to shine through. The longer you look the more you see, picking up on little details that may otherwise go unnoticed and unappreciated. Menus pulsate, borders waver and animations pop. The screen is constantly busy, yet never cluttered, and the focus of the action is always clear. The UI is gorgeous, the use of black and red, shadow and light is striking, and the character models are a thing of beauty. If we hadn't already established that video games aren't art, then I might suggest that Persona 5 is a work worthy of mounting on your walls. It's not though, because games aren't art; art and stuff is art.

Combat flowed nicely and the transition in and out of battle was flawless. Options included gun and sword - each character carried two weapons - as well as order, item, guard and of course, Persona. Battles were fast and colourful and could end in a number of different ways. The most common was outright victory, your enemies' HP reduced to zero and basic rewards collected. However, in some instances, weakened demons may be held up for money and items, convinced to join you as an ally or executed in a giant pile on, a scene which plays out in stylish black and red silhouettes. At the conclusion of battle, our hero runs across screen, cheered on by his teammates. This is a wonderfully satisfying and visually pleasing treat that varied slightly from battle to battle, and a great way to transition from combat to dungeon crawling with minimal downtime.

I did have a couple of minor gripes. The enemies seemed a little ordinary, at least when compared to P4G, and the demo made little effort to offer any sort of variety of foe. There was no boss, at least not that I was able to reach in the limited time afforded me, and no attempt was made to convey any sort of meaningful narrative. The demo just threw me into a dungeon and let me get on with it. Also, the camera felt a little off in places, particularly wayward when making sharp turns.

Like with most RPGs, Persona 5 does not lend itself to a short demo, yet I still came away thoroughly impressed. I'm somewhat tempted to buy a Japanese copy, but I fear that too much of the narrative would be lost on me, so I'll probably wait. February is such a long way off though....
Tokyo Game Show '16