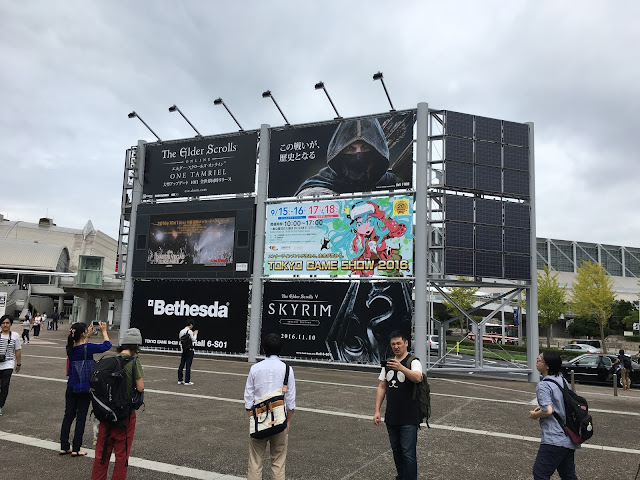 Day One of TGS is in the bag. I played some games, walked around a bit, frowned at FFXV and seriously depleted my mobile data plan. I'll be back at it tomorrow, as there are plenty more games to try, shite merchandise to photograph and beers to drink.

I'll be up at the crack of dawn tomorrow - five mutherfucking AM in the mutherfucking morning - so I'm going to keep this brief. Here is my roundup of TGS Day One, written by me, at three minutes past midnight. After a handful of beers.

ChANgeS
TGS is bigger than I remember. In 2011, the last time I attended, the show was down to three halls of Makuhari Messe convention centre, and I ran out of things to play on the first day.

In 2016, home consoles are dying, but TGS is as alive as I can ever remember it. Level-5 and Microsoft are long gone, but there's a whole hangar dedicated to indies and merchandise, which never existed before, and the mobile turnout is of a much higher quality than I remember. Pretty good, all things considered.


gAmES
I played some games today.

Yakuza 6 was wonderfully Yakuza and Final Fantasy XII HD: Zodiac Something did a fairly good job of making a PS2 game relevant. Persona 5 was an absolute joy (hands on impressions forthcoming) and I enjoyed World of Final Fantasy about as much as I can enjoy a game about deformed, chibi characters. Final Fantasy XV was bloody awful but Valkyria: Azure Revolution was alright.

I'll share some more in-depth opinions after I've had some sleep.

Veeee-ahhhhhhhhhH
Everyone wanted to play VR games today. Unfortunately, my tolerance for queueing is minimal, so I was shit out of luck. Sony were offering numerous VR demos, but the lines were shocking and you weren't able to choose the game you wanted to play. VR is rubbish.

Lunch
I had beef on rice for lunch. It was acceptable.

I have no idea how I restrained myself. There's every chance that I might crack tomorrow.

明日
I have an appointment with Capcom tomorrow, so I should be trying VR for the first time, with Resident Evil 7. I also hope to check out Horizon Dawn, the extended Yakuza 6 demo and trailer, Mafia 3, Monster Hunter Stories and plenty more. I usually run out of games to play early on in the second day. However, this year is a little different as there's still plenty left that I'd like to try on day two. Which is nice.

You can follow my TGS coverage here at toomanywires, on Twitter (@toomanywires_) and over at Critical Gamer.
Tokyo Game Show '16