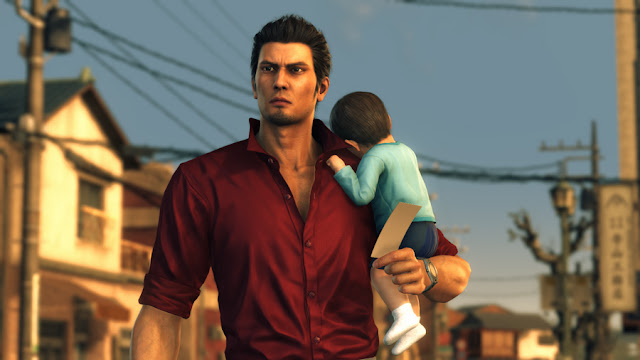 Tokyo Game Show just wouldn't be the same without a new Yakuza. They have dominated SEGA's booths over the years and are usually among the best received and well attended demos of the show. This year was no exception.

Yakuza 6 (Ryu ga Gotoku: Inochi no Uta) is the latest instalment. Series protagonist Kazuma Kiryu is fresh out of prison when he discovers that Haruka, his daughter or sorts, has been involved in a hit and run incident and is in a coma. Kiryu needs to find the culprit, but it's not that simple. During Kaz' time in the slammer, Haruka has had a baby, Huruto. Kazuma & Haruto head to Hiroshima in search of the child's father, which is where the demo kicks off.

It begins with Kazuma walking the streets of a small town, cradling baby Haruto. After a bit of aimless wandering, we arrive outside a snack bar, a hostess-lite establishment, where the proprietor takes a shine to Kaz and baby and invites us inside. In true Yakuza style, Kaz quickly attracts unwanted attention, as a mouthy regular takes umbrage at the stranger sat in his local. Kaz calmly hands Haruto to the lady behind the bar and heads outside to serve up an arsekicking. We quickly overwhelmed this lippy troublemaker, beating him into a bloody pulp, and then returned to the bar to collect baby Haruto. Yakuza as fuck.

The rest of the demo was more open, as I was able to explore the new setting and get into a few more fights. The gameplay is reassuringly familiar, yet the improvements are clear. The transition from exploring to combat is seamless, and loading screens have been removed entirely. This was even more evident in the second, Kamurocho based demo and the subsequent trailers, where battles moved from the street to indoors without even the hint of slow down. The transitions from outside to in, from floor to floor and from action to exploration are now instantaneous. This is the first truly current gen Yakuza - there will be no PS3 version - and it shows. The animations look smoother and combat has lost none of its frenetic and satisfying qualities.

The TGS trailers have revealed plenty about what we'll be doing outside of the main story. Play Spots, Yakuza's extra curricular activities, are as varied and silly as they've ever been. One particular mode, Clan Creator, looks especially promising. You collect and manage allies, creating your own street gang. This brand new mode includes tactical, team vs. team battles, with up to 100 bad shits on each side.

I've sunk a lot of time over the years into Yakuza side quests and play spots, and I expect to sink a lot more into Y6. You can take up body building, adopt cats, manage and play in your own baseball team, play with Haruto, watch real-life cam girls (a bit odd) and delight the locals with your ukulele skills. Spear fishing looks fun, though I feel bad for the great White Shark seen attacking Kazuma in one of the trailers. Club SEGA arcade has been greatly expanded. Now you can play Virtua Fighter V in its entirety, alongside online Puyo Puyo and a range of retro arcade cabinets, including Outrun and Fantasy Zone.

I really do love this series and will be picking up Yakuza 6 when it's released here in Japan on December 8th. There's no word yet on an English localisation, and I wouldn't expect anything any time soon. However, recent events would suggest that there's a decent chance that it'll happen somewhere down the line.

Be sure to check back over the coming days, as I'll continue to post lots of hands-on impressions from TGS. I'm also writing over at Critical Gamer
Tokyo Game Show '16