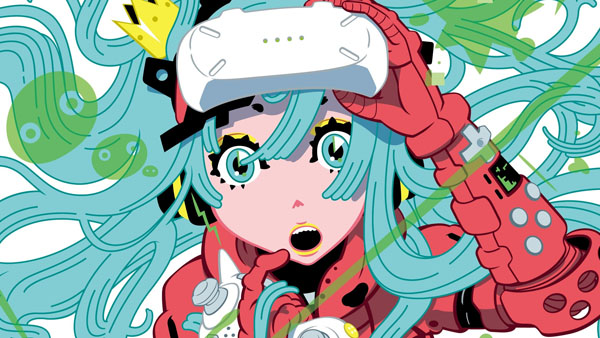 I live in Japan.

I have a laptop and three pens.

I have a Press Pass.

For the first time since 2011, I will attend TGS. I'll play games, watch trailers, eat shit curry for lunch and stare at internet-famous people. I will also tweet a lot, blog a lot and do some words over at Critical Gamer. This is my Christmas, in September, and I hope you'll join me.

Two days is more than enough time to see everything TGS has to offer. But lets pretend for a moment that it isn't, and that I need to prioritise my activities to ensure that I can fit everything in.

Because that's what I've done.

Of the Utmost Importance

VR, VR, VR. I have no interest in playing VR games in my home, but fuck me I'm excited about trying some at a trade show. I'll make a beeline for Resident Evil 7 as soon as the doors open, and I'd love to try Rez Infinite should I have the chance. Most likely, the wait for both of these titles will be horrendous and I'll end up settling for some school girl VR smut instead. Regardless, I will most definitely pop my VR cherry this week. I already feel dirty.

I must also give one of my hastily printed business cards to someone who might actually care, and drink at least one beer whilst debating my standout game and complaining about the number of white people and mobile games on the show floor. I must also mark the occasion by buying something silly; I already have my sights set on a rather ugly Sega Saturn phone case and a Yakuza mug. Also, I'll probably purchase whatever Mog plush Square-Enix is selling at their ludicrously over priced merchandise booth. I've really missed TGS.

Firstly, I'm going to ask someone what's going on with The Last Guardian, because there's no way that's coming out next month. I'll ask Fumito Ueda if I bump into him, or some random at the urinals. Whatever, I'll get an answer. I'm also going to check out the new action game that Square Enix is teasing. There are no hints or clues, but I reckon it's a new Vagrant Story. My reasoning is that I like Vagrant Story and it was made by Square.

Sticking with SE, I want to see a Final Fantasy VII Remake trailer. Nothing has been announced, but I'd surprised if we didn't see something. I'll also check out the demo for Final Fantasy XII: The Zodiac Age, an HD upgrade that I can definitely get behind. I'll also play some FFXV, just to reassure myself that it's going to be a disaster.

Elsewhere, I must check out the Yakuza 6 extended trailer. No TGS is complete without a breathtaking slice of Yakuza and at least one Nagoshi spotting. Horizon Dawn is a decidedly un-TGS title, but I still really want to take it for a spin. Everything I've seen so far suggests an intriguing mix of Xenoblade Chronicles X and Monster Hunter, and that sounds delightful.

Maybe If I Have Time

I like Monster Hunter and I like Final Fantasy, but MH Stories and World of FF look a little too cutesy for me. Still, they might be worth a look on Day 2. I'm excited about Persona 5, but it's out next week in Japan so it seems a bit silly playing it at a trade show. Still, if I have time, then I'll give it a go and let you know all about it.

The SEGA booth seems like a pretty good destination for Day 2, as I wouldn't be averse to spending some time with Hatsune Mikue VR, Valkyria Azure Revolution and whatever the latest version of Puyo Puyo is. The second day will also be a great opportunity to check out a few indies and shake my head at sweaty men salivating over scantily clad ladies.

Not in a Month of TGS Sundays

There's no way I'm going to TGS on the public days (Saturday & Sunday). I'm not an animal.

My TGS coverage starts on 15th September. You can follow it here at toomanywires, on Twitter (@toomanywires_) and over at Critical Gamer.
Tokyo Game Show '16