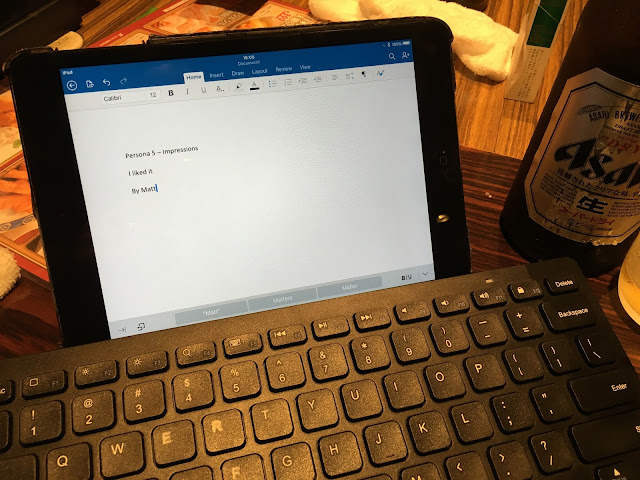 That's my TGS done for another year.

I had a great time, even if nothing really blew me away. VR had a huge presence and, on the whole, the show felt more vibrant and expansive than it did the last time I attended (2011). Console gaming may be in sharp decline here in Japan, but the usual exhibitors (Sony, Sega, Capcom etc.) put on a brave face and there was plenty to check out. The indie scene was well represented, there was a VR headset everywhere you looked, and of course there were plenty of mobile games.

I'm now suffering from TGS comedown. I won't attend the next two public days - though the thought did cross my mind - and I'll try to keep myself occupied with writing. The video game industry is still where I desperately want to be, though I don't feel I'm getting any closer to making that happen. Hopefully, one day soon, my involvement in the industry will amount to more than just two days in September.

But let's forget all that for now. Here's my hastily written Day Two round-up (Day One is here), with lots more coverage to follow over the next few days, including photos and Persona 5, hands-on impressions.

My Quest for VR
I struck out on VR on Day One. The wait for Sony's headset was never less than two hours, and most of the time staff simply weren't letting new people join the queue.

I headed straight for Sony's VR booth at the start of Day Two, hoping to beat the crowds. Unfortunately, due to a work commitment, I arrived 15 minutes after the doors had opened and the lines were already closed. I hightailed it to the rear of Square Enix's booth, where Bethesda were offering a Doom & Fallout 4 VR demo, but that was already at two hours. So I ran to the other hall, where Sony had a second, smaller VR presence and I finally had some luck. I was able to make an appointment for Rez Infinite for later that afternoon. I was very, very pleased with myself.

I was supposed to play Resident Evil 7 in VR at lunchtime, but Capcom PR let us down - I'm guessing they decided we weren't important enough and gave our prearranged appointment to someone else. Fortunately, Sony were a lot more reliable. I'll write up my Rez impressions in more detail later on, but overall I enjoyed it, though it wasn't quite what I was expecting and didn't sell me on VR as an at-home, gaming experience. More on this later.

Games
I played very little on Day Two. Thanks to long lines and appointments that I needed to keep, I managed to play only Resident Evil 7, Horizon Zero Dawn and Rez Infinite VR. I was able to check out a few new trailers and gameplay videos, including The Last Guardian and Yakuza 6, and spent a little time poking around the indie booths.

If I'd had more time, I would like to have tried Monster Hunter Stories, Nioh, Mafia 3, the second Yakuza 6 demo, and some of the smaller VR experiences that were on offer. I would have also enjoyed sitting down more - my legs are very sore this morning!

Queing for Queues
You'd think these game journalists had never seen a game before! Lines were long, and games that seemed less popular on day one, such as Mafia 3, suddenly had waiting times north of an hour. VR slots were exceedingly hard to come by and there were queues for queues. I had to abandon the line for the Yakuza 6 trailer and extended demo when I realised there was no way I was going to finish up in time for my Capcom appointment. I heroically vaulted a barrier in an attempt to escape and managed to tweak my calf. I spent the rest of the day hobbling around like the RE7 Granny.

VR aside, Horizon Zero Dawn had the longest waiting times, rarely dropping below two hours. I spent 100 minutes waiting for that demo, and honestly it probably wasn't worth it. It looks promising, but the demo was very basic and I'm guessing, or rather hoping, that it didn't do the game justice. More about Hoizon ZD another day.

Twenty Years of TGS
Tokyo Game Show is celebrating its twentieth birthday. There was a large and interesting exhibition detailing its history, including a display of past game-of-the-show winners. There were also a number of retro consoles set up ready to play, which made for a nice break from the VR and HD onslaught of the main floor. Keeping it retro, there were a handful of merchandise booths celebrating what came before. SEGA in particular was well represented with badges, key chains, shoes, t-shirts and phone cases of past consoles and well-loved characters. Plenty of ways to blow a small fortune.

Be sure to check back over the coming days, as I'll be posting more in-depth impressions. I'm also writing over at Critical Gamer
Tokyo Game Show '16