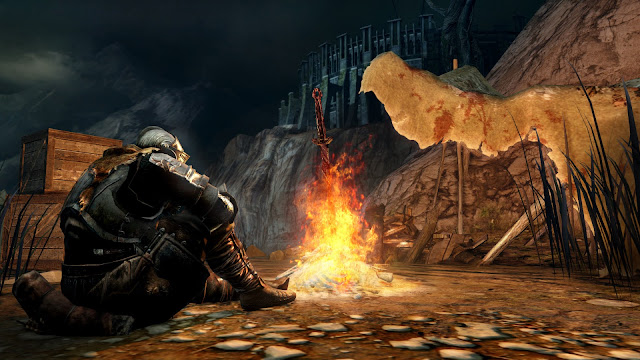 Next week I’ll be covering Tokyo Game Show, so I need to remember how to write words about games. That’s why I’m blogging (almost) every day for the next week, after which my TGS coverage will kick in.

Another month, another remaster.

You played this on PS3? Why not play it again, only this time on PS4! Missed this one on the Wii U? Of course you did, so why not consider trying a slightly enhanced version on your Switch! This generation, only Microsoft has paid any real attention to backwards compatibility. For all the good press it generated, I'd be surprised if it had any lasting effect on their bottom line.

I get why publishers repackage older games. It’s a safe investment and it can open up an existing property to a new and expanded audience. I’m certainly not averse to shelling-out a second time for games I love.

I’ve put tens of hours into repeat experiences so far this year, including two of my favourite games from the last generation: Burnout Paradise and Call of Duty 4: Modern Warfare. Burnout Paradise is sheer joy, interactive entertainment in its purest form. It is bereft of needless padding, complicated menus, gritty drama, shocking violence and men with gravelly voices - it’s just about driving really fast and doing things that are far too stupid and far too much fun for real life. You load-up, accelerate and go find your own fun. Within seconds, you are doing something entertaining, whether that’s racing, stunting, crashing or oftentimes all three. Honestly, I’d buy a remaster of the remaster if EA let me.

You know all those things I said about violence and gravel? Well, sometimes those things are good. CoD4: Modern Warfare is still the best CoD, at least as far as single player campaigns go. Pretty much everything I have enjoyed about the series can be traced back to Modern Warfare, and unlike many other shooters of its time, it holds up wonderfully today. Memorable set pieces, stages that don’t outstay their welcome, and a story that is both ludicrous yet semi-believable, kind of. Also, Captain Price has an excellent handlebar moustache.

My fondness for older games in 2018 doesn’t stop there. Lumines Remastered on the Switch has been my go-to game for the last few months. Whenever I want to play but can’t get on the TV, or am struggling to find the motivation to start something new on the PS4, I reach for Lumines. With the exception of Monster Hunter World, I’ve probably put more time into it than any other game this year. Sticking with the Switch, I’ve also bought Skyrim again, because it’s Skyrim and I quite like the idea of dipping back in to that world.

I’m playing Spider-Man at the moment, but once I’m finished I’ll be moving on to yet another re-release: Yakuza Kiwami 2. In my defence, Y2 is the only mainline Yakuza that I haven’t played, so it’ll be new for me. I can’t say the same for the Red Faction Guerrilla remaster. A criminally overlooked game from the last gen, it quickly dropped to a price that I was happy paying. I haven’t bought the Dark Souls remaster yet, but I most likely will at some point. So many games and so little time to fully enjoy them all!

And then there was the announcement last month that Koch Media had bought the rights to the long dormant TimeSplitters series. As the foremost TimeSplitters-liker I was of course ecstatic. However, it is revealing that it’s not the prospect of a new TS that has me most excited, but the very real chance of getting a TS2 or Future Perfect remaster. Imagine playing those games again, but on modern hardware. Beautiful!

Some games are worth playing twice.
Contemporary Games