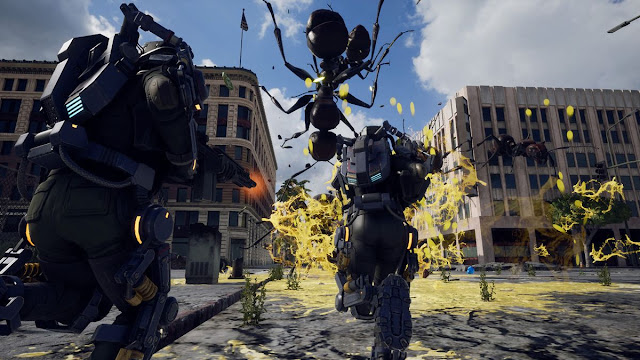 Earth Defense Force: Iron Rain was perfect for a lazy, TGS Day Two afternoon. The wait was minimal, the demo was fairly short, and EDF is hardly the most taxing of games. You just point your gun at the big insects and keep pulling the trigger. Considering how tired I was, I couldn't have asked for a more suitable hands-on.

Iron Rain is the latest entry in the long running EDF series, which sees you repelling an extraterrestrial invasion of massive fucking insects. What started out as a budget title has since developed into something larger, though it has retained many of its cheap-and-cheerful production values and a focus on tongue-in-cheek action.


Iron Rain, we are told, is the most polished EDF yet and the improved visuals and refined gameplay mechanics should appeal to a wider audience. It is true that it looks a little prettier at a distance, but it doesn’t really stand up to closer inspection. It’s still difficult to differentiate between glitches and intended jank - dead enemies bounce all over the place and your character will clip through everything, including but not limited to rubble, NPCs, and big ants.

And there’s more to clip through than ever before, thanks to new environmental destruction. Enemies bring down tower blocks and the stage soon resembles a war zone. The whole thing felt more chaotic than ever, which is exactly what you want from EDF.

The combat is simple yet fairly satisfying. Mowing through waves of bugs and giant mechs is rather relaxing, especially as most of them don’t put up much of a fight.  While the big ants had minimal interest in scrapping, the massive mechs, presumably piloted by slightly smaller ants, were far more aggressive. They smash their way through the level trying to reach you. When they do, they invariably miss with their huge, slow to fire hand cannons. They tower over the EDF’s finest, and the publisher has teased even larger and far more menacing enemies, though they weren’t present in the demo.

Mowing down wave upon wave of robots and bugs is entertaining, to a p. The heavy machine gun is surprisingly effective, even against mechs, but you’ll probably want to switch to something bigger when the action heats up. The rocket launcher was useful. Instead of running out of ammo, it overheats and needs time to cool down, which means that you don’t need to waste time scavenging for ammo. Your fun-time is optimised, and you can quickly get back to massacring over-sized insects. Speaking of dead insects, I particularly enjoyed the ant's death animation, where they curl up, do a bit of a bounce and then go BOOM! Up in flames, just like real ants.

At one point, I commandeered a car, but it didn’t seem to offer any tactical advantages other than looking a bit silly. Fighting off alien hordes in a family sedan doesn’t seem like the best idea, especially when that car steers like it has four flat tires.

It might not be Need for Speed, but Earth Defense Force: Iron Rain will please existing fans. This isn’t reinventing the wheel; it’s just making it look a tiny bit prettier without sacrificing any of the series’ rough and ready charm.
Tokyo Game Show '18