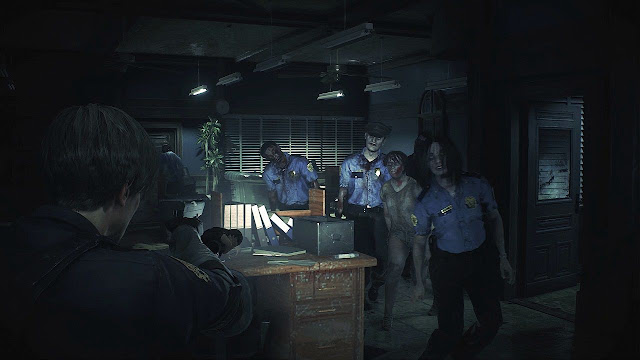 It’s been twenty years since I last played Resident Evil 2. Twenty years since I sold my Sega Saturn and games to fund the purchase of a PlayStation and a copy of RE2. A desperate act for a SEGA diehard, but I had to play Capcom's latest. It was well worth it.

Twenty years later, and Capcom are rebuilding RE2 from the ground up. It’s not a remaster; it’s an existing game rebuilt and refined. Like the original, there will be two main scenarios – one starring Leon and the other led by Claire. In the first of the Tokyo Game Show demos, Leon has just arrived in the central hall of the Racoon City Police Department and is desperately trying to gain access to adjoining rooms so that he can rescue a fellow cop. Claire’s demo focussed on her first meeting with a young girl named Sherry and an intense showdown with the monstrous William Birkin.

First off, it looks great. Unlike Remake, which looked a little basic by modern standards, the visuals in RE2 are very much up to date. Much like RE7, it has a grimy and grainy quality, but when the camera goes in for a close-up of our protagonists, you can see Capcom’s proprietary engine going to work.

The demos were very effective in juxtaposing dark, claustrophobic spaces with more open and brightly lit areas. The latter offered brief respite, before Leon and Claire were funnelled into much tighter and dangerous spaces. No setting felt more confined than the mini maze of industrial platforms and corridors where Claire first encounters Birkin. I’d turn a corner and bump straight into him, and time and time again I bolted down a corridor only to find myself trapped in a dead end.

RE2 remains as grotesque as the original. Although it appears to take itself a little more seriously, it hasn’t entirely lost its tongue-in-cheek charm. Zombies chomp, blood splatters, cops are eaten alive, and Leon and Claire carry wounds from their run-ins with Racoon City’s undead. Leon spent an entire cut scene with a visible bite mark on his neck, looking like he’d just spent some time with an overly amorous lover. The jump scares are still there too. I almost leapt out of my chair at one point when a body came crashing down from the ceiling above.

The controls and camera (over-the-shoulder, like RE4) are of course greatly improved on the original. However, it does retain the essence of the old tank controls, without being tied to them. Movement is fluid but still very deliberate. Even when running, there is a weight and lessened pace that that serves to remind you that you are playing Resident Evil. As with the original, inventory space is minimal. Capcom clearly doesn’t want you stockpiling powerful weapons and lighting the place up. This is still survival horror, not a powered-up shooter.

Combat is a tense and desperate affair. During the brief time I spent between the two demos, I had to ration ammunition, avoid unnecessary violence, and occasionally resort to my trusty knife. Even when I was wielding the shotgun with flame rounds, I still felt like I was outmatched. The most basic of enemies will soak up plenty of bullets – it took three head shots with Leon’s pistol to put down run-of-the-mill undead – and larger foes will run you dry. Playing as Claire, I exhausted almost every bullet in my inventory when fighting Birkin. It made for a tense but exciting encounter, and I breathed a sigh of relief when he finally keeled over, just as I loaded the final clip into my pistol.

Resident Evil 2 Remake looks very promising. It has been remade for a new generation, but it seems to have retained the essence of the source material. It is Resident Evil through and through, and I’m looking forward to playing it in full this January.