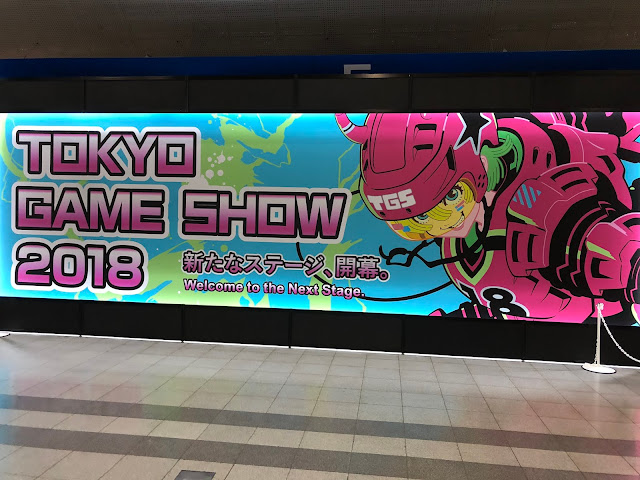 Day One of Tokyo Game Show is done and dusted. It was a good day.

I knocked out all four of my most wanted games. My legs survived, I didn’t spend too much money on needless souvenirs and I’m only a tiny bit drunk as I write this, so my Day Two hangover should be manageable. All-in-all a resounding success.

I’ll be posting in-depth impressions over the coming days, but for now here are some odds and ends from a day spent in the Mecca of video games: Makuhari Messe, in Chiba, on the Musashino Line.

I spent time with Resident Evil 2, Tetris Effect in VR, Sekiro: Shadows Die Twice and Devil May Cry V. They were all very good. From what I saw, Sekiro was by far the most in-demand game of Day One. They only had four demo units, and they were constantly having to close the line as it grew too large.

So, it turns out I’m very bad at video games. I stunk the place up so badly that I felt the need to apologise to the demo attendant at the Tetris Effect booth. If you didn’t know better, you’d swear I thought that Tetris was a tower building game. Gotta stack those blocks as high as you can!

I was too tired to apologise to anyone after my appalling showing during the Sekiro: Shadows Die Twice demo. I lined up for two hours so I could spend fifteen minutes dying over and over again at the first mini-boss. To add to my embarrassment, I noticed some of the dev team watching over my shoulder. If Sekiro comes with a special, easy option, then you can blame me.

So, it turns out I’m pretty good at queuing. With the exception of Sekiro, which took a cool 130 minutes, I was in-and-out nice and quick on every hands-on. I walked straight into the booth for Resident Evil 2, and only had to wait around thirty minutes for Devil My Cry 5, because I agreed to play it on Xbox One, a shocking prospect for most Japanese attendees.

I completely lucked-out with Tetris Effect in VR. The VR games at the Sony booth were by-appointment only, and I certainly didn’t have an appointment. However, there was the option to wait around for a cancellation, though you couldn’t choose which of the several demos you played and there was no guarantee that you’d play anything. I got lucky and got the only demo I was interested in playing, and all within fifteen minutes. KING OF TGS! 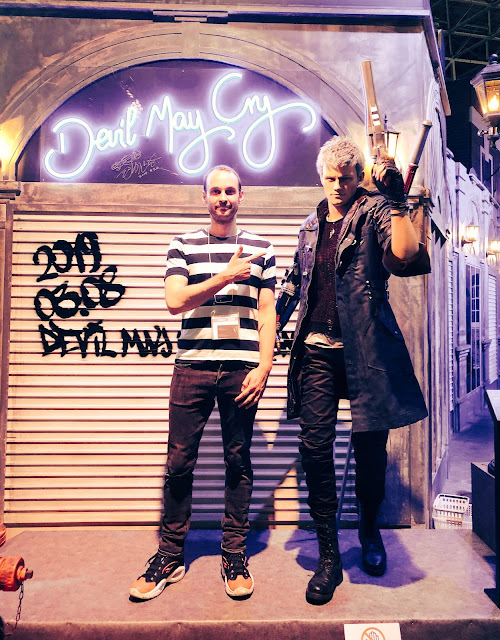 What should I do with my hands?

I watched a number of people pose with Nero while I was waiting for the DMC5 demo. There were numerous approaches. Some people tried to put an arm around the model, mostly cheeky foreigners, but they were quickly reprimanded by a stern-but-fair Capcom employee. There were a lot of “number 1” gestures and an unnecessary amount of first pump poses. Some people just stood there and mustered a smile; others looked like they were attending a funeral.

I decided against planning in advance - figured I’d wing it. This pathetic point was the best I managed. I’ll be honest, I panicked. I thought something cooler would naturally happen, but I was very wrong. What you can’t tell from the photo is that I was actually pulling my trigger finger, as if I were sending a cheeky shot in Nero’s direction.

I locked myself in the toilet for fifteen minutes after this photo and cried it out. I will apologise to Nero tomorrow.

Spotting an industry luminary milling about TGS never gets old. I saw a number of familiar faces today, including SEGA legend Yu Suzuki. I considered asking him if he'd seen any sailors, but I figured it would be far too hilarious, so instead I said nothing and just kept scrolling through Twitter.

Some thoughts from looking at other punter's screens.

Right, I'm going to grab a few hours sleep. I'll be back at it again tomorrow, fighting through a hangover to make video game magic.

I really shouldn’t have had that last IPA.
Tokyo Game Show '18