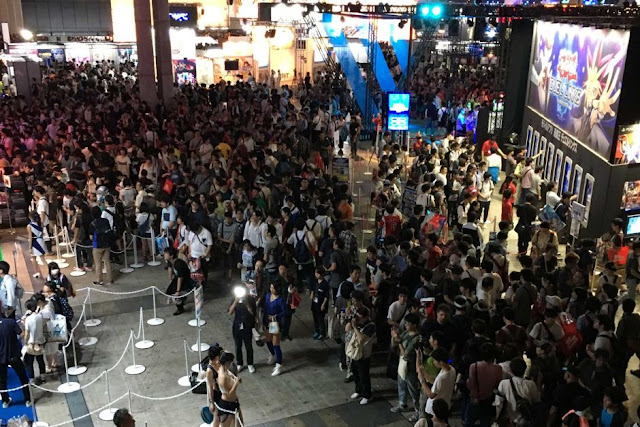 I'll be attending Tokyo Game this week and posting lots of hands-on impressions.

The doors open for Tokyo Game Show at 10:00AM sharp. I usually hang around until about 4:00PM, at which point I head into central Tokyo for drinks and merriment. So that's around six hours on the show floor, at least half of which will be spent waiting in line.

Unless you are industry royalty or belong to one of the biggest media outlets, you line up with everyone else. Even on press days the lines can exceed two hours for the most popular games, and significantly more than that on the public days.

You have to come prepared. Wear comfy shoes, bring some form of entertainment, carry as little swag as possible and never ever join a queue that you cannot see the end of.

A typical TGS in-queue experience goes a little something like this.

00:00 – This game looks good and the queue seems manageable. I’ve got an appointment in ninety minutes but I should have more than enough time to play this demo and make it there in time. I'm the king of TGS!

00:05 – Great, they’re showing a video of upcoming games on the overhead monitor. This’ll keep me entertained for a while.

00:15 – This line hasn’t moved yet and the preview video is just looping every three minutes. Going to try to ignore it and catch up with my emails.

00:16 – I just remembered that no one emails me. I can’t watch this video again. I’m going to try closing my eyes.

00:25 – Hold on a fucking minute. Why are those people cutting-in? Why are they getting the red carpet treatment? I don’t care if they’re Hideo Kojima or some other industry legend, they should join the back of the line. That’s added at least another ten minutes to my wait time. Inconsiderate pricks.

00:26 – It was Hideo Kojima. Still, he shouldn’t be allowed to jump the queue like that.

00:30 – My feet are starting to hurt. Why the fuck am I wearing dress shoes? Going to try balancing on my left foot to give my right a rest. Will alternate each time that infernal preview video loops.

00:32 – Just used some rudimentary Japanese with one of the booth staff. The Japanese guy in front noticed – I can tell he wants to strike up a conversation, emboldened by the discovery that I know at least five words in his language. I don’t want to chat.

00:45 – We haven’t budged for ten minutes. I’m seriously considering leaving the queue so I can make it to my appointment. But we are really close to the black curtain, directly behind which I can only assume is the demo kiosk. I can do this – just hold the line and keep my nerve.

00:51 - We're being ushered through the curtain. I'm seconds away from playing an actual video game and also, just as crucially, sitting down for ten minutes. Here we go .... oh no. There's another line through the curtain. It was a trick. They just wanted me to think I was close to playing a video game. Why do they do this and why do I fall for it every fucking year?!

01:00 - If the guy behind hits my leg with his bag one more time I'm going to kill him. Actual murder. Will suffocate him with his own bag or punch him so hard he combusts.

01:01 - After some consideration, I've decided not to do a murder as I don't want to be removed from the queue.

01:10 - Looks like we're in business. I can finally see the demo kiosk and the booth attendant has handed me a laminated sheet detailing the demo controls. It feels like I'm about to sit an exam, which I'm guaranteed to fail.

01:20 - I've given up on that appointment. If I sat on the floor, would I get in trouble? I'm pretty sure everyone else in this line would be happy to join me.

01:35 - I'm two people away and I've just realised that this demo is being broadcast on a massive screen. Hundreds of people are going to see me being shit at video games. I can't back out now though, I've been here too long.