Ends and Beginnings That Are Also Ends 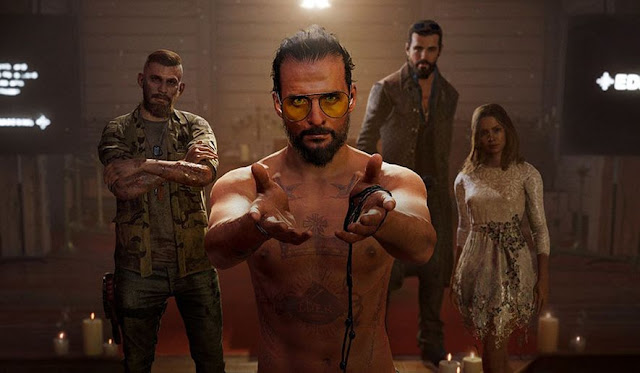 Next week I’ll be covering Tokyo Game Show, so I need to remember how to write words about games. That’s why I’m blogging every day for the next week, after which my TGS coverage will begin.

It turns out that Joseph was telling the truth. We were teetering on the edge of destruction, at the mercy of a wrathful God, and Joseph was in on it. Divine forces were whispering in his ear, giving him a godly heads-up about our impending doom. Far Cry 5’s Hope County is gone, consumed by a nuclear fire, presumably along with a significant portion of the US.

All my slaughtering was for nothing. The countless times I interrupted roadside executions, freed locals, cleared bases, located collectibles and culled cultists – it was all for naught. My friends are vaporized, and my dog is gone. My yellow helicopter is scrap metal, and my guns are fucked.

My Far Cry 5 ending was desperately grim, but I kinda liked it. It didn’t make the things I did during the game any less fun, and I appreciate one final twist of the knife at the end of a long game. Clearly my struggle to save Hope County was doomed from the outset, if you could call it a struggle. I spent most of the game base jumping, skunk hunting and crashing light aircraft into ponds, none of which was particularly constructive or helpful.

With our protagonist trapped in a bunker with a top-knotted god-friend for the foreseeable future, it was time to move on to something else. That something was Nier Automata, one of the most talked-about games of last year.

I have successfully avoided Nier spoilers, yet I had some idea of what to expect. For example, I knew that the story would unravel over multiple playthroughs and various endings. I was well aware that it would do things that would annoy me, but in other areas it would delight.

I thoroughly enjoyed the prologue, in particular the changing camera perspectives and industrial setting that reminded me of Metal Gear Solid 2’s Big Shell, but I fell at the final hurdle. My inelegant button mashing proved insufficient, and I copped it at the end-of-level boss. Fine, I thought, I’ll pay more attention to the patterns and mechanics and beat it easily the second time around. Let’s go, android lady!

But no. It turns out that my death was an ending of sorts. The credits rolled and I was thrown back to the very beginning of the game with fuck all to show for it. Thirty minutes of lost gameplay may not seem like much to some, but that’s often a full evening session for poor old me. I was royally fucked off and I took the hint that this might not be a game for me. Maybe I’ll give it another try, or maybe I won’t.

Not that it matters anymore, as I’ve moved on to Spider-Man. It’s quite good.