If it Ain't Broke Still Fix it 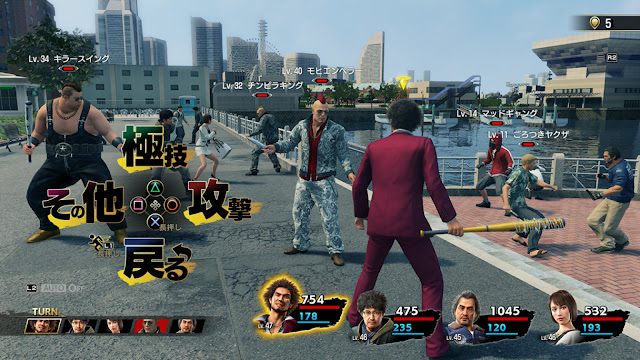 In a surprise to absolutely no one, Yakuza 7 is officially a thing. It'll be out next January here in Japan, and will follow at a later date elsewhere.

It will be the seventh mainline Yakuza, but that number is misleading. Parts one through five have all had remasters, and there have also been numerous spin offs. Yakuza 0 was an entertaining prelude to the series; Kenzan and Ishiin took our lovable thugs back to feudal Japan; Dead Souls pitted our heroes against the undead and the PSP games cast a new lead into familiar surroundings. At its worst, Yakuza has been decent. At its best, it has given us some of the finest games of the last two generations.

I've been playing since 2010, which is when I first picked up Yakuza 3. When Sega halted localisation, a mistake that has since been corrected, I just imported the Japanese versions. I love the series, but in many ways it had become too familiar. Introducing co-leads in Yakuza 4 and 5 was a great move, but it was still the same core mechanics with many of the same characters, in conceptually familiar settings.

Yakuza 7 isn't reinventing the wheel, but it is making some core changes. Kazuma Kiryu is out as the protagonist, though I'd be very surprised if he didn't reappear further down the road. His replacement is Ichiban Kasuga - a well-meaning criminal dressed in the same colour scheme as the man he's ousted. The main setting has switched to Yokohama, but we've been to other urban settings before so this is no great shakes.

The latest, and arguably most meaningful change is the combat. The frenetic and over the top real-time brawling has long been the series' bread and butter, it's calling card in a world drowning in action games. Yakuza 7 will retain the comedy-violence of it's predecessors, but will do so via turn-based combat. From what we can gather, you'll have control of a party of dangerous-but-nice individuals, with the player doling out commands much like you would in a party-based RPG.

Of course we don't know how well this will work. The response from fans was mixed, but I'm encouraged that the team is trying something new. The series is riding high and enjoying a new level of success internationally, so to do this now is certainly brave. But I love it. Better to make changes on their own terms, than to wait for everyone to tire of the same-old and then implement changes.

So many other contemporary series have outstayed their welcome. God of War refused to change for years, as did Assassin's Creed - an extended break was needed for both before they were welcomed back. I played Just Cause 4 earlier this year. What was once a hugely enjoyable romp of destruction has become a been-there-seen-that bore that needs to take a generation off, or come up with some very new ideas.

Resident Evil, on the other hand, did an exemplary job of keeping things fresh. It married a change in generation with a risky change in approach. It left survival horror in the past and gave us a genre-defining action game in Resident Evil 4, when most of us were expecting something in the mold of 1-3. Square threw us a curve ball in 1997 by giving the FF license to Yasumi Matsuno and his Tactics Ogre team. The resulting game was the brilliant FF Tactics, which stands entirely apart from the rest of the series up to that point.

Like Resident Evil 4 before it, Yakuza 7 is proactively making changes while the going is good. I'm looking forward to giving it a whirl at TGS.