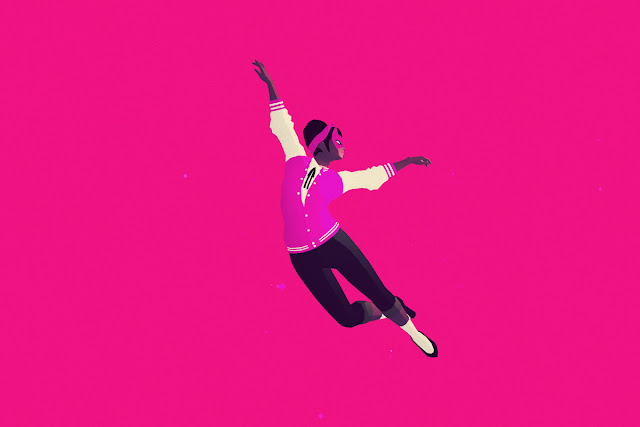 I haven't done one of these Musings posts for three years. In the last edition, I was opining the end of my Witcher 3 DLC journey, saying farewell to the Wii U and discussing the newly revealed Switch and the possibility of it running Skyrim.

As we now know, Skyrim runs on everything. A future far greater than I could have ever imagined.

Yes it has a very silly name, but Sayonara Wild Hearts is a wonderful little game about pop music and moving very fast through purples and pinks. It's Rez-like in places, which I love, though the marriage between music and gameplay is not as tight. It's short, which I also love, stylish - love - and it always makes you feel like you are doing something awesome, even if you are essentially just guiding your character down a tube.

The pop-electronica score is decadent and perfectly fits the visuals - or perhaps it's the other way round? My interest never wavered, in part thanks to an ever shifting mode of propulsion. One moment you're riding a motorbike, the next you are astride a deer or behind the wheel of a sports car, drifting your way through a neon nightmare. Sayonara Wild Hearts is short, sweet and memorable, and I feel 20% trendier for having played it.

I'm back on my Monster Hunter bullshit. I have thoughts.

I Like: Being back on the grind. Piecing together sets of armour, checking out FAQs on the toilet, pondering new swords; turning a severed tail into a spiffy cap. And the grind seems less painful than before, though this could be partly down to good luck. I seem to have the requisite materials for most armour sets after two successful quests.

I Dislike: The initial, cosmetic downgrade in armour. Giving up my end-game threads for Jagras slacks and looking like an HR5 scrub, even if I could survive being hit by a bus full of Rathian, was painful.

Like: The monsters. We've got returning favourites and brand new beasts; they all look and sound wonderful. They all behave differently and each demands a unique approach.

Dislike: The "seek out a bunch of tracks and monster detritus" and "go hunt these lesser monsters until we flush out your true target" bollocks wears thin pretty quickly. This needless padding seems more offensive than it did in World.

Like: Seliana town. The new hub is far easier to navigate than Astera. Far fewer loading screens and everything is on the same level. It's much easier to get in and out, and back in the field in no time.

Dislike: My teammates. My squad were able to get through the game quicker than me, and we've hardly played together. I was having a good experience hunting with strangers, until I hit the last few bosses. I've spent the last week failing the late-game missions, as my partners die over and over again. Having nothing to show for multiple hours of effort is very frustrating, and is an example of MH at its worst.

I was bored on the train the other day, so I decided to write a shopping list of sorts: games I've missed this year that I'd like to play. I was surprised by how many there were:

I've since bought Untitled Goose Game, but I wouldn't be surprised if I didn't get to any of the others this year. In fact, there's a fairly good chance that I'll never play the majority of the games on this list.

Once I've wrapped up Iceborne, I'll move to Final Fantasy VIII Remastered. Then it'll be time for November's big game: Mario and Sonic at the Tokyo 2020 Olympics. Seriously though, it looks great. Death Stranding will either be breathtaking or awful - either way I'll be playing it. 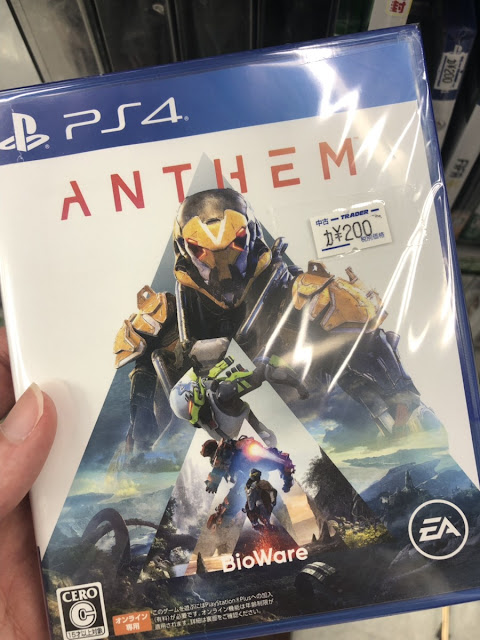 So you know how I just said that I don't have enough time to play the games I want to play?

Two hundred Yen for a used copy Anthem. That game really tanked, huh? At that price, it's worth it just to see what it looks like. I've heard that post-launch patches have improved things somewhat, but I'm not expecting much. I also picked up End of Eternity from the discount bin, or Resonance of Fate as it was known in the west. I played the demo ten years ago at Tokyo Game Show and though it was alright. A decade seems like an appropriate amount of time to wait, and 300 yen is a very agreeable price.

If you live in one of the ten countries that gives a shit about rugby, then you'll know that Japan is currently hosting the World Cup. It has been an exciting tournament so far, and the host nation is already 2-0, including a huge upset win over no.2 ranked Ireland. The family and I have been watching every game we can, and we'll be seeing England live this weekend.

Anyway, all this excitement got me thinking about the only rugby video game I've ever played: Jonah Lomu Rugby on the Sega Saturn. I sold my copy along with my first Saturn in the late Nineties, and it's the only title that I've not re-bought from my original selection. I'd like to remedy that at some point. However, it was never released in Japan so it's not as easy as walking into my local retro shop.

I recall a solid sim, with a large selection of teams, tournaments, classic game modes, real-life players and excellent audio commentary. But more than anything,  I remember how comically large Lomu was compared to everyone else. A humongous torso the size of a scrum, blasting through helpless defenders at top speed. Lomu was huge in real life, but his stature was somewhat exaggerated here. I guess that's one of the perks of having your own game.
Musings of a Gamer