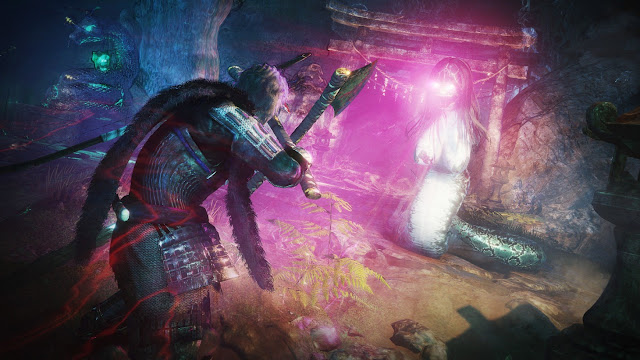 I've already posted impressions from Day One and Day Two, as well as previews for Final Fantasy VII Remake, PC Engine Mini and Yakuza 7, with Project Resistance to follow in the next day or two. I've used up nearly all my words, but there's still a handful of games left to discuss.

Nioh 2 was the main draw at Koei Tecmo. I haven't played the first game, so I was at somewhat of a disadvantage here. However, by the end of the demo I had definitely gotten the hang of it. Death came early and often, but each failure revealed a little more about how to approach each enemy and progress further.

Death is not overly punitive, thankfully, and the restarts are quick and painless. Our protagonist's repertoire of moves includes heavy and light sword attacks, which you can alter by switching stance, and a comparatively weak bow. You can also unleash the beast, transforming momentarily into a Yokai to deal heavy damage. This came in handy during the end of stage boss, an over-sized gorilla-like monster that was both powerful and agile. By the time I'd encountered him, I was comfortable enough with the mechanics to bring him down on my first attempt. Even in such a short demo, I felt like I had improved and progressed. No mean feat.

Konami had a very lively booth this year, with plenty of space given over to Contra Rogue Corps. This included a bevy of muscular men parading around the booth and showing off their missiles - not a euphemism. There were also larger ballistics hanging overhead, intermittently firing off smoke and making a racket. So yeah, very lively. I've already documented my Contra mid-demo theatrics, and honestly they were far more memorable than the actual game, which is a mindless co-op run-and-gunner. It was a manic experience, with silly characters - I played as a heavily-armed panda - fighting wave after wave of enemies. It wasn't terrible, just noisy and unexceptional.

In a turn up for the books, I played a mobile game! Still at Konami, I got a hands-on with Castlevania: Grimoire of Souls. I mainly did it for the plastic whip but the game was also decent. I played the single player story mode, and there was also a demo for 4-player co-op. The visuals are polished, it sounds great through headphones, and from what I could tell it offers a fair bit of depth, including a multitude of abilities and upgrades. I couldn't tell you how it fits within the series' lore, as I've played very few Castlevania games, but I certainly recognised some of the characters and themes. The controls were confusing at first, with flicks and touches mapped to different actions dependent on the direction of movement, but it wasn't overwhelming.

The Panzer Dragoon remake was a pleasant surprise. It was hidden away at the rear of the main hall, with next to no signage. It was running in handheld mode on the Switch, to which it was well suited. It is colourful and simple, and I was happy playing a Saturn classic on modern hardware. There is input lag, it feels a little bare in spots, and I can appreciate why PD die-hards might be upset with the changes from the original, in particular the colour palette. Still, as a novelty, l enjoyed it. 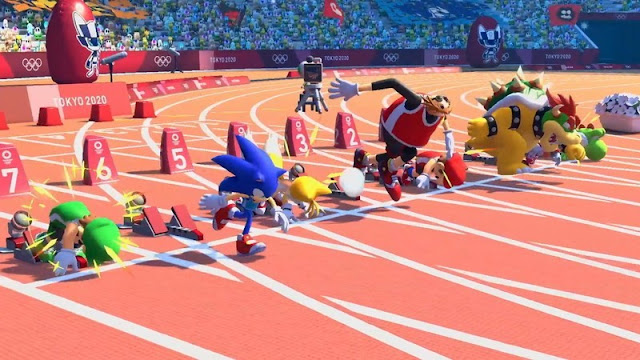 Finally, I spent a little non-Yakuza time at the Sega booth. I started off with Sonic at the Tokyo 2020 Olympics, a simple but charming mobile title. You move around a cartoonish map of Tokyo unlocking a variety of events. I had access to hurdles, which was dull, and trap/clay pigeon which was far more engaging. But what I really wanted to try was Mario and Sonic at the Tokyo 2020 Olympics on the Switch, which I did straight after. I had the option to play with motion controls on a mini stage, but I chickened out and opted for a more private demo with the pro controller. From what I saw of the tennis motion-controlled demo, it seemed very similar to Wii Sports, which is no bad thing. It looked like fun.

I had access to around ten events. Going by the stage select scene, I'd guess that's around half of the full roster. The presentation is as charming as you'd expect, and I was impressed by the variety of events. I had time to sample three of the sports on offer: hurdles, surfing and archery. Hurdles was the least interesting of the three, just a case of timing your jump correctly to earn speed boosts. Surfing was fun, allowing you to ride several waves within a set time period. The tricks are simple to nail, and I got to see Mario with his top off. Archery was my favourite of the three. It requires a little more thought, as you need to consider wind direction and distance from the target, as well as battle against the pull of the cross hairs. All three events were easy to pick up and play due to intuitive controls, and none of them outstayed their welcome.

Towards the end of my allotted time, I glanced over at the screen next to me and caught a glimpse of one of the 2D retro modes, which I had completely forgotten about. I quickly returned to the main menu to try it out, but my demo ended before I had the chance. I am a terrible video game tryer.