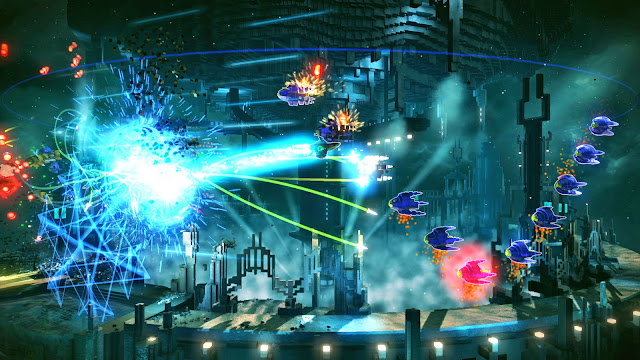 I'd almost forgotten about Resogun. Not totally of course, but it'd been a long time since I'd last given it a moment's thought.

I played Housemarque's masterpiece to death when it first arrived as an obnoxiously generous PS+ game at the PS4 launch. I learnt the patterns, the sounds and the enemy types, all in a effort to set the highest possible score.

On bad nights, I'd play for hours on end, restarting every few minutes, once I'd realised that I wasn't on course for a world-beating score. Come the early hours, I'd have nothing to show for my evening of stick twiddling except a headache and an ever-growing sleep deficit.

On the good nights, I'd slip into the zone. All instinctive movements, completely in-tune with the flow of action, and always in the right place at the right time. By the end of the first month, I'd destroyed everyone on my friend list and sat comfortably in the Top 40 on the worldwide leaderboard.

Basically, I was proper good at Resogun.

I came back for the DLC packs and also played the impressive Vita version a year later. I've revisited it here and there, but not for a few years. I had expelled it from my thought space some time ago.

Resogun had slipped my mind, until I stumbled upon an episode of the excellent Cane and Rinse podcast dedicated to it. The episode opened with the Resogun title-screen music - as soon as I heard it I was overcome by a flood of memories. I was picturing the ships, the colours, the alien enemies and their patterns. I was instinctively psyching myself up for a high-score run. That brief snippet of music had me pining for Resogun and brought back a mood long since forgotten.

Some game music will do that. I only need hear the briefest sound effect or musical sample from Final Fantasy VIII and I'm transported back to that world. Same goes for most of golden-age Final Fantasy, really. The sounds of Age of Empires can set me off, taking me back to the late 90s, sat at the family PC trying to figure out why exactly the game had crashed mid-way through my custom battle of Thermopylae. Familiar sounds from familiar games can evoke a range of emotions, from joy (Rez Infinite; the nice bits in Flower) to sadness (the sad bits in Flower), or a mixture of immense happiness, gratitude and an overwhelming sense of loss (MGS3: Snake Eater).

So yeah, I heard some music from Resogun and it made me really want to play Resogun, which is a terrible idea because it'll tire me out and I won't play other things. Other things like Fire Emblem Three Houses, which I'm loving, and the soon-to-be-released Monster Hunter Iceborne and Final Fantasy VIII Remaster.

I guess the humans will have to save themselves.
Contemporary Games