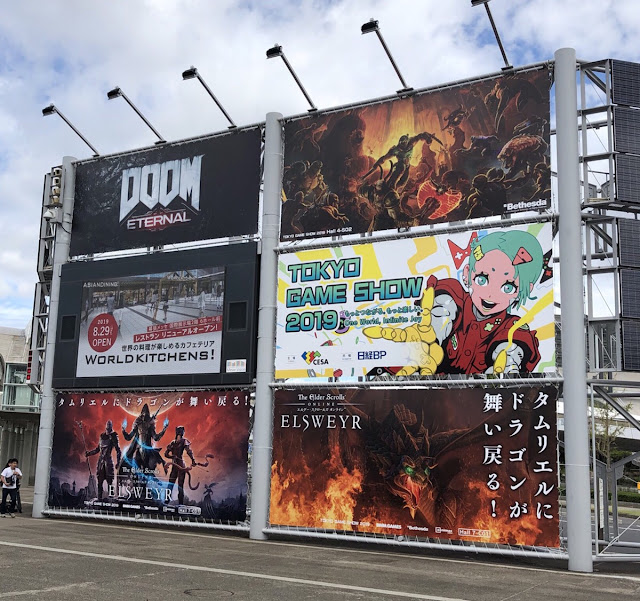 Crayfish! Buster swords! Mr X! Kojima! Socks! Perverts! Exclamation marks! Day One of Tokyo Game Show 2019 is over, which means it’s time for me to write a brief round-up blog before I collapse from exhaustion and beers.

I went straight for Square Enix and the Final Fantasy VII Remake demo as soon as the doors opened, and I was rewarded for my forward planning. I didn’t have to wait at all and was treated to an outstanding demo. It’s early days, but it’s great to see all the positive vibes surrounding this game – a game that could so easily disappoint its fans. I’ll post a full preview in the next day or so.

I came out of the Yakuza 7 demo bouncing. It was daft, the turn-based combat was a breath of fresh air, and I’m considering playing it again tomorrow. I also played Nioh 2 (not ideal as a demo-game), the PC Engine Mini (I am bad at video games) and Project Resistance (didn’t enjoy it, but not sure if that’s a fair reflection of the game or not). Previews for most of, if not all of these are incoming.

There were some notable changes at this year’s show. Firstly, many of the booths had figured out their line problems. I didn’t wait for more than 30 minutes for anything, and I was able to stroll straight into most demos. Sony did away with long lines by making all demos ticket-based – you get a ticket at the start of the day telling you when to come back for your hands-on. My feet feel great and I only wanted to murder three people, which is well below my usual TGS average.

The food court moved outside, which is bad because Japan is still hot as balls and I’m pretty sure I saw a Scandinavian melt trying to enjoy a rice bowl. After god knows how many years in the same spot, Sony moved their booth location. I couldn’t decide if it was an upgrade or a downgrade, but their roster of games wasn’t all that exciting. End of the generation and all that.

I bought some Mega Drive socks and I’m still eyeing up that Alex Kidd t-shirt form last year, but it’s just too damned expensive. I might settle for a Saturn shirt for half the price, or some non-embarrassing normal clothes for a fifth of the cost. There was plenty of other over-priced junk, some of which I may purchase with my coins tomorrow.

Despite not bringing a playable demo, Death Stranding and Hideo Kojima managed to dominate TGS 2019. The stage show and 50-minute demo was a huge draw towards the close of the show, as was the trailer booth that ran all day. I watched 10 minutes of the demo, and I still have no idea what DS is going to be, but that might be because I was still thinking about that Yakuza 7 demo and was in no way paying attention to whatever Kojima-san was babbling on about.

Tomorrow
Yeah, I’m not really sure. I’ll probably turn my attention to the indie area, maybe try something in VR, and perhaps give the Yakuza 7 demo another spin. Maybe I’ll finally buy that Alex Kidd t-shirt.