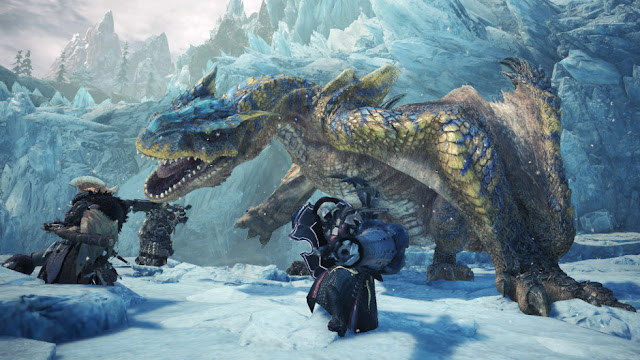 Monster Hunter World: Iceborne is out this week. This is very exciting but also mildly daunting.

My Monster Hunter World crew is getting back together. We've dusted off our Line Chat and begun searching for our came-in-the-box headsets. We all put in at least one hundred hours last year, slicing and bashing our way through turkey dinosaurs and angry pig elephants. All but one of us were veterans of previous Monster Hunters, and for the most part we knew our shit, or at least enough to be competent.

But that was a year and a half ago. As much as I'm dying to jump back in, I'm wary of the steep (re)learning curve that I know awaits me. There will be new things to learn, returning mechanics that made little sense the first time around, and an online lobby system that is as clear as Rathalos shit.

Iceborne will be cold, hence the name. There will almost certainly be some bullshit drink I have to quaff every 87 seconds to stop myself from freezing solid, which I probably get by equipping several herbs to my wrist crossbow and firing them at a cat, but only on a Tuesday; this feline is located in the secret gathering point. I need to be above Hunter Rank 191 to see this cat, but that's irrelevant because I've already died from dragon poison build up. Also, I'm still at the title screen.

I loved Monster Hunter World. It was right near the top of my 2018 rankings and it's the most fun I've had with online multiplayer in years. More of the same sounds very agreeable, but the reluctance to invest the time I'll need to re-learn everything is very real. Aside from the obtuse processes and mechanics, I also need to worry about whether the expansion is even accessible to me. I'm fairly confident that I did enough in the base game to hit the expansion requirements, but I wouldn't bet my feline on it. This isn't good, and I'm getting stressed just thinking about it.

This is how I felt going back to Dark Souls and its ilk, after a prolonged absence. I couldn't remember where I was, what I was doing or, most importantly, how not to be irredeemably awful at it. Much like Iceborne, I seem to recall past DS DLC being quite particular about what you had to do before accessing the new content. You need to earn that new expansion - your coin alone is not enough.

I have every confidence that Iceborne will be an absolute blast. I'll get hours of entertainment out of it, and it'll be my once-per-year foray into online multiplayer. I just wish it didn't already feel like hard work.
Contemporary Games Monster Hunter