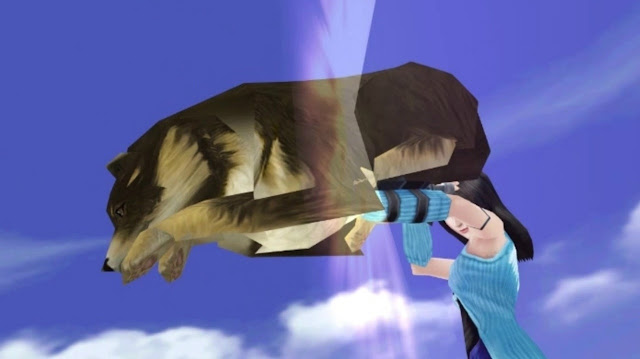 As you already know, Final Fantasy VIII Remastered is out now. The universally accepted "Best Final Fantasy" features modern additions like graphics, faces that don't look like arse, and trophies/achievements. So let's have a look at the Trophy list and use it as an excuse to reminisce about the second best game ever made.

Quezacotl - Unlock the Guardian Force
As a teen, I frequented a number of Final Fantasy forums, under the handle Quezacotl22. I even made a little banner with a picture of the GF alongside my name. My parents were worried about me during my mid-teens, and with good cause.

Shiva, Ifrit, Siren etc. - Unlock the Guardian Force
WARNING: GFs may make you forget inconsequential things like the entirety of your childhood and what you just wrote.

Shiva, Ifrit, Siren etc. - Unlock the Guardian Force
WARNING: GFs may make you forget inconsequential things like the entirety of your childhood and what you just wrote.

Handyman - Upgrade your weapon
The gunblade might be the best ever video game weapon. It's a sword, but it is also a gun. Squall and Seifer wield them like surgeons with a scalpel, able to nick a bit of flesh out of each other's foreheads when charging at full pelt, instead of dashing their brains all over the intro movie. To be fair, it would've been a different game if they'd killed each other at the outset.

First Salary - Get your first salary from SeeD
SeeD is an appalling organisation. It's raising an army of teenage mercenaries, who its dispatches willy-nilly to kill its political enemies. Its students are not even old enough to drink, but killing is fine. Fortunately, my precious sociopaths have always been paid handsomely for their murdering, as I printed the SeeD exam answers off the internet back in the year 2000, which enabled me to level up quickly. Printing FAQs was a thing we did before the invention of smartphones.

Maximum HP - Reach Maximum HP
I loved the draw and junction system. I liked having to decide between magic usage and godlike stats, and the experimenting the system encouraged. To be honest, it confused me on my first playthrough, but it clicked on subsequent runthroughs, where I'd spend hour after hour drawing and looking through grey menu screens.

Chocobo - Capture a Chocobo
Despite the PocketStation being unavailable outside of Japan, its functionality was retained in the localised versions of FFVIII by way of the Chocobo World mini game. It was a absolute mystery to me, a source of wonder to be enjoyed only by the Japanese. This is the first time I can recall considering what games people elsewhere in the world were playing. Within a year, I was importing FFVI, FF Tactics, Xenogears, Chrono Cross and the like.

Compelled by a retained curiosity, I bought a PocketStation more than a decade later, but to my shame I have never used it.

Omega Destroyed - Defeat the Omega Weapon
Tonberry - Unlock GF Tonberry
Cactuar - Unlock GF Cactuar
Time-consuming bosses and unlockables were a core feature of PS1-era Final Fantasy. This was shitty even at the time, but that didn't stop me from investing countless hours into unlocking every GF and destroying every boss. If a game asked me to do this today, I'd return it and send death threats to members of the development team, as is the done thing.

End of Game - Finish the Game
I've lost count, but I reckon I've completed VIII four or five times. The last was around fifteen years ago, though I did put in about twenty hours on the Vita back in 2012. There was a time that I'd play every FF multiple times, but that came to a end with XII, at which point my interest in the series was starting to cool and I was beginning to accrue adult responsibilities.

Ragnorak - Find Ragnorak
You can't beat flying around a FF world map. It's a defining feature, as FF as mogs, chocobos and brooding male leads. I remember despairing when I learnt that FFX would have no overworld and no airship. I'm sure I voiced my displeasure on some FF forum or another, before settling down to another run of VIII.