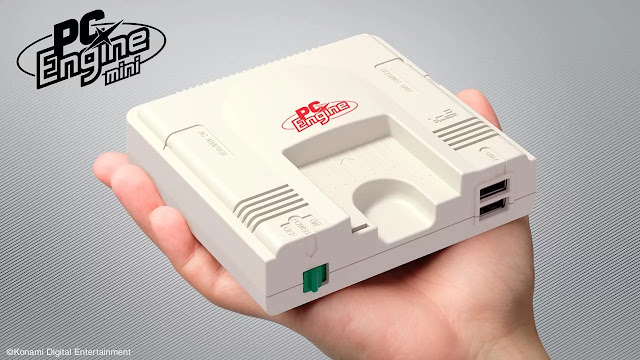 Run button? Does it mean press forward? That must be what it means. Hang on, no there is a Run button - how weird. I'd best press that then.

I had never played a PC Engine until three days ago, when I spent some time messing about with the Japanese Mini at Konami's booth at Tokyo Game Show.

I am assured that the emulation is excellent, being that it comes from developer M2. I can confirm that the games run smoothly, but I have no frame of reference for comparing them to the originals. The system looks tidy, the controller is solid, and the audio, experienced through headphones, is crisp. Despite there being 57 games available, the interface is uncluttered and the option menus are easy to navigate.

Now we've got all that out the way, let's get back to my never having played a PC Engine, TurboGrafx-16 or whatever you prefer to call it. The original console has long been a mystery to me. I have no history with it, and don't recall being aware of its existence until I first moved to Japan in the mid 2000s. I've considered buying one from my local retro stores several times, but it has been a tough sell without any kind of nostalgic connection.

Driven by curiosity, the promise of a sheet of stickers, a short wait and a chair, I decided to familiarise myself with the Mini. I filled my fifteen minutes with as many games as possible.

1. スーパーダライアス (Super Darius)
This was a good place to start, as I've played Darius games before. I recognised the artwork and could read the Japanese kana, so it was an easy one to pick out from the menu. I was dead within 30 seconds because I am bad at video games, especially when people are looking over my shoulder. Otherwise, it was very good.

2. THE 功夫 (The Kung Fu)
I could not for the life of me figure out the reading of that kanji, so I just decided that it was called The Bruce Lee. This was painful - the Kung Fu bloke was massive on the screen and the controls were far too basic. I quickly abandoned it before I'd even had a chance to suck.

3. スプラッターハウス (Splatterhouse)
I went for something familiar here. I had fun swinging my plank into squidgy horrors and would have quite happily continued playing, had I not already settled on sampling as many different titles as possible. 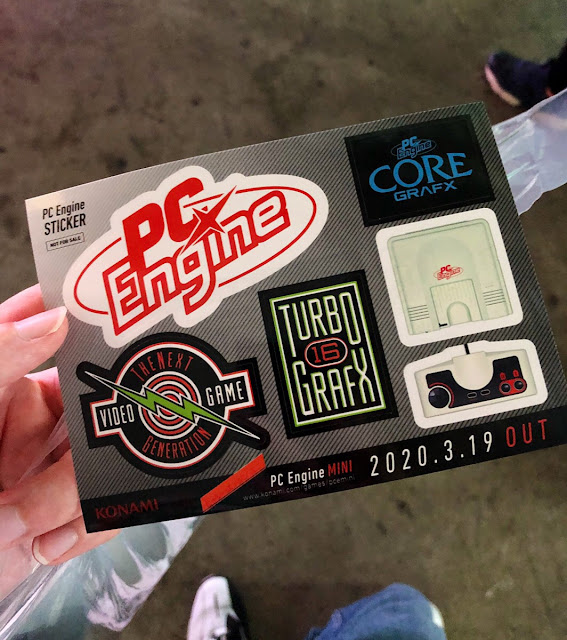 4. 忍者龍剣伝 (Ninja Ryukyuden / Ninja Gaiden)
Those Kanji are a little beyond my level, but I had a feeling I was looking at Ninja Gaiden. I was very happy with myself once I'd confirmed my guess. This was another good time, until I attached myself to wall during a jump and couldn't figure out how to pull myself up. One of the staff noticed and was heading over to help me. Desperate to avoid embarrassment and human interaction, I quickly backed out to the home screen. The booth staff backed off - mission accomplished!

5. スプリガン mk2 (Spriggan Mark 2)
Never heard of this one before, but I chose it because I recalled Spriggans being in Skyrim. Much to my surprise, it was not about tree-like creatures, but is instead a mech, horizontal shooter. I can neither confirm nor deny whether a tree was piloting the mecha. I rather enjoyed this one as I was passable at it, dancing between missiles and raining death on my enemies.

6. 悪魔城ドラキュラX 血の輪廻 (Castlevania: Rondo of Blood)
I knew what I was getting into here. I could read most of this title in Japanese, and the whip boy on the cover art was a dead give away. I only played for a minute, as there was one more game that I absolutely had to play before I ran out of time.

7. SNATCHER (Snatcher)
Guess who played Snatcher at a 2019 video game show! I did, obviously. I cannot think of a game more ill-suited to the constraints of a timed demo, but I couldn't help myself. It looked like Snatcher and played like Snatcher, so that's a thumbs up.

I enjoyed my Mini experience. It was nice to play something that was retro yet also new to me. I can't say whether I'll buy one next year, but I certainly had fun during my fifteen minutes, even if I spent most of it cluelessly bumbling around.

I trust that this has all been very informative.
Tokyo Game Show '19