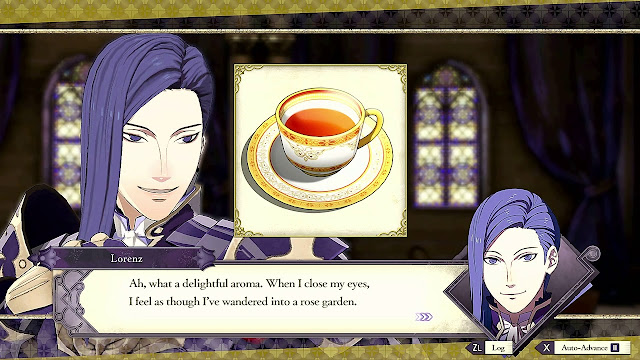 I chose the yellows, and it was the right decision. The Golden Deer are my children and I love them very much. Even Ignatz.

I've not yet finished Three Houses, but I think I'm around 80% there. Over the last forty hours, I have grown very attached to my students. They are a bunch of unique characters, brought together by age, location, their love of Teach (me), and their willingness to kill ex-classmates when I tell them to.

At the midpoint, the story jumps ahead five years. This has allowed me to admire the development of my boys and girls from students to real life movers-and-shakers. Personalities have changed and relationships have shifted during my time spent in a bad-magic induced coma. But most importantly, their hairstyles are different.

You can see all the haircuts here

1. Lorenz
A stunning improvement for the Gloucester Alliance's finest dandy. He's added length to accentuate the shape of his face and highlight his effeminate features, and he's carefully selected armour to match his hair colour. This is far removed from his weird semi-bowl cut from the early going, which almost put me off selecting the Golden Deer as my house. His hair says "yes I'm a massive prick, but you wouldn't say no. But I definitely would, because I'm Lorenz." Not literally of course, as hair isn't able to speak. I'm just saying he's done well for himself.

2. Leonie
The extra length works wonders for my favourite cavalry unit. It has softened her appearance without sacrificing her edge. Everyone still knows that she's a bad bitch and won't think twice about running her lance through your gut, then cutting the ears off your corpse to wear as grotesque jewelry, and adorn her horse with your severed genitals. Like Lorenz, she has also made the effort to build her wardrobe around the shade of her hair. Jeralt would be so proud of her, if he weren't five years in the ground.

3. Claude
I'm a little torn here. I'm not sure that I consider his transformation an upgrade, but at the same time I want to reward him for making an effort to change. His thin, jawline-hugging facial hair is a little too early 2000's Craig David for my liking, but he is the only Golden Deer who has proven he can grow facial hair. I'm guessing he tried to grow a moustache but it was a fuzzy disgrace, so he just stuck with what he could grow. His hair is similar but straighter, a change which I'm assuming he has to deal with every morning. Good on him for finding time for personal grooming despite the absolute state of his kingdom.

4. Raphael
He has started combing his hair forward. There are two likely explanations for this slight change in hairstyle.

1. He is a fan of young Justin Beiber.
2. He is trying to conceal a receding hair line

I'm going with no. 2. As someone who is also struggling with thinning hair, I'm awarding him a sympathy vote here and ranking him higher than other classmates who made minimal changes. Had the time shift been ten years, I think we would have seen a bald Raphael. I also think Lorenz would be sporting a purple comb-over.

5. Hilda, Lysithea, Marianne
They've all just tied their hair in a slightly different manner, which is lazy. I like the minor change the most for Lysithea, and she should get points for working in new accessories. Also, in character she seems to have changed the most. She is more forthcoming and direct than she once was, though my view of her may be a little skewed by her role on the battlefield, as she has risen from a low-usage mage to a one-hit-kill master of the dark arts.

6. Ingnatz
It's just a different style of bowl cut. Of all my characters, he was the one I had hoped would turn up with white-man dreadlocks, but I was to be severely disappointed. A missed opportunity and yet another example of Ignatz letting everyone down.

Thank you for reading my blog post about the hair of video game characters.
Contemporary Games